Nighttime reading and the lamp

A ROOM LAMP that lived in a household once loved reading. “I love to travel with my imagination”, she kept saying, keeping many books in her bookcase, both new and old, with beautiful images or without. No matter how many books she possessed, however, she couldn’t stop buying new ones, to the point that her bookcase kept getting larger day by day. 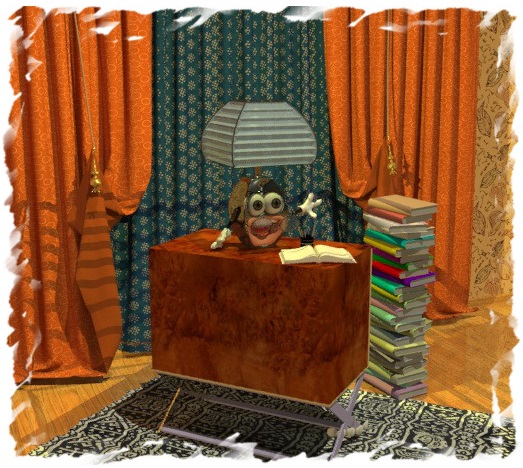 When one day she realized she had stockpiled quite a lot of them, she decided to read even at nights, as days were no longer enough. “How about placing a bet that you won’t manage to stay awake?”, the candlestick, who was used to staying up late, told her. She, then, thought the candlestick was jealous of her, as the light he kept producing was not enough for reading. “You can’t relate”, the lamp told him.

The same night, she waited until the rest of the appliances went to bed. She then grabbed the novel which she had bought and sat comfortably on the tabletop. “Twenty thousand leagues under the sea”, the book cover, on which the painting of a gigantic submarine could be seen, read. “I really enjoy Jules Verne’s works”, she said, then put on her glasses and started reading.

As she turned the pages one by one, she dived so deeply into the book’s plot that she read nonstop. “I’ll stay awake tonight and finish it”, she whispered to herself as the clock that was hanging on the wall opposite her ticked eleven, then kept reading feeling great curiosity about what would happen next. The candlestick then told her: “Highly unlikely you’ll finish it. Why don’t you switch off your light so we can all fall asleep?”. Yet, she kept reading until the clock ticked twelve.

At some point, she let out a loud yawn. “Will you finally close the book so we can fall asleep?”, the candlestick, which was laying on the same tabletop and woke up by the sound, demanded with anger.

“Not even if it’s dawn”, stubbornly replied the lamp, who then kept reading. The candlestick turned side and kept sleeping, only to be awaken once more by the lamp’s light two hours later.

“About time you let the book down and went to bed FINALLY”, the candlestick said a third time, only to hear her reply: “It’s just one FINAL chapter till I finish the book”.

She then replied: “No, but I… dreamt the end instead!”.  She then took the book and excitedly read the last chapter. As soon as she had finished it, and with a big smile on her face, she placed it on the bookshelf, content that she had reached her goal even without managing to stay awake.