The kitchen stove that was always late

AN ELECTRIC STOVE that once lived in a household was always late to show up on dates. “I’m really sorry for making you wait…”, she used to say every time she arrived late, never to change her manners, however. The other home appliances eventually got really tired of all the waiting. 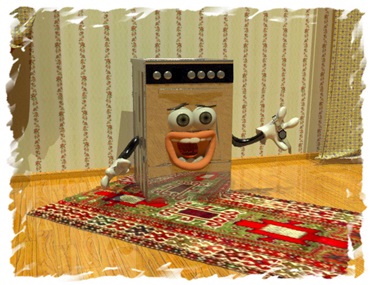 “Since she’s always so late, how come she doesn’t burn the food she cooks?”, the toaster curiously asked the other electrical appliances, and so they thought of asking her to cook for them so as to put her on a trial. She accepted the challenge with excitement.

“We want steaks for today”, the electrical appliances asked her the first day. And so, she did as she was asked: she bought steaks which she placed on a pan and added butter, salt and pepper. When she thought the time had come to take them out of the pan, however, she realized she had over-fried them. After removing the black crust with a knife, she put the steaks on big plates and served them to the other appliances as if nothing had happened.

“I was late because I made them ‘well-done’”, she justified herself to the other electrical appliances who started suspecting her delay. Then they all sat together and ate, not realizing that the stove had almost burned the food.

The second day, they asked her to cook lentil soup. She took out a big saucepan, filled it with water and then emptied two big bags of lentils in it, enough to accommodate all her guests. She, then, let the lentils boil and went to her other tasks, only to come back half an hour later and realize that they had been overboiled: other got stuck on the bottom of the pot, whereas others were simply tasteless. As soon as the stove saw what she had done, she immediately removed the pot from the burner and served the lentils in soup bowls, adding extra oil, salt, vinegar and bread so as to cover things up.

“Lentils are tastier when they are well cooked!”, she told the other appliances who had gotten tired of waiting. Then, they all sat together and ate, exchanging suspicious looks with each other so as to understand whether there was something wrong with the lentil soup.

The third day, they asked her to make stuffed vegetables. She took a big pan and filled it with plenty of tomatoes and bell peppers that were filled with rice, as well as potatoes which she had hastily peeled the same morning. She then placed the pan in the oven and turned the switch. Just like the previous two times, she again forgot to switch the oven off on time.

“What do we do now…?”, she wondered as she took the pan with the stuffed vegetables, which had turned black, out of the oven. As time was passing and they were already feeling hungry, the other electrical appliances got really curious this time. To spare herself from the embarrassment, she quickly took a second pan out from the kitchen shelves, filled it with tomatoes, bell peppers and fresh potatoes, and started thinking of excuses to justify her delay.

“How much longer till the food is ready?”, the toaster asked the stove. She then hid the pan and replied: “In… 5 minutes… just be a bit more patient!”. The five minutes though quickly became ten, and the other appliances became increasingly impatient. The more persistently they asked her, the more she avoided the question and promised that the food would be ready anytime soon.

When at some point they stopped bothering her, she wondered: “Are they not hungry anymore?”. As soon as the stuffed vegetables had been cooked, she hastily took them out of the oven, served them on plates and went straight to the kitchen, only to be amazed with what she saw: half the appliances were devouring pizzas and burgers, while others were drinking soda to digest the fast food they had already eaten.

“Since stuffed vegetables are a quick option and it’s been hours since you went to the kitchen, we thought it would be best to order something that would come on time!”, the other appliances told her, bursting into laughter. “Don’t feel sorry, though, as we can have the stuffed vegetables… for dessert!”, they added and she became red with shame as she realized she had been ridiculed.

So, she took her lesson and from that day on, she decided to be always on time.