A TOASTER that once lived in a household was very lazy, always looking for ways to take a break whenever somebody told her to do house chores.  Apart from being lazy, however, she was also greedy, and every time she took a break, she went straight to the fridge to get materials for a toast which she then devoured in an instant. So, the other appliances were left without a snack, as she barely ever left any bread for them. 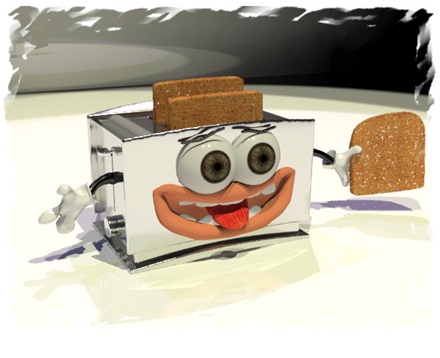 Seeing she wouldn’t change her manners, they, one, day thought of putting her on a trial. After giving it thorough thought, they decided to assign to her the task of placing the books on the bookshelf. “She can have as many breaks she wants, so long she gets to finish the task and the books are in proper order by the end of the day”, said the vacuum cleaner, and the rest of the appliances agreed.

“But in order to finish it on time, you need stop frequenting the fridge”, they told her and showed her the empty bookshelves. Not only did the toaster agree, but she was also excited with the idea that she could have as many breaks as she wanted without having somebody supervising her. “I’ll have them in place in no time”, she told them, then opened the crates which were filled with all sorts of colorful books of all sizes, ready to be placed on the respective bookshelves. So, she started placing the books one by one, even using a small ladder to reach the higher shelves.

Only a couple of minutes later, however, she thought of having a break. “About time I ate a toast…!”, she thought. She then made sure no one was watching, and ran to the fridge holding two books in the hands, only to forget them there as she took two slices of bread as well as some cheese and ham, with which she quickly made a toast. After devouring it, she went back to the living room to continue.

Just as she had finished placing the books on the first shelf, she thought of having a break again. “I’m worth it”, she thought, then ran to the fridge, again with two books in her hands. Giving it little thought, she took two slices of bread, cheese and ham, and made a second toast which she ate in no time.

The same thing happened a third and then a fourth time, and again, every time she had finished a bookshelf: she ran to the fridge, holding two books in the hand, then make a toast which she ate greedily. When the time came for her to fill the highest shelf, she wondered: “How will I reach that high?”.

With her stomach bloated from too much eating, she placed the ladder and climbed the steps. When she looked down, however, she got surprised to see that there was no box with books left, only crates which she had previously emptied. She then summoned the other electric appliances and told them: “I’m finished with my chore. There are no more books for me to place on the last shelf!”.

“Of course, as you have placed them in the fridge shelves”, the vacuum cleaner exclaimed and the other electric appliances burst into laughter. Then they all went to the kitchen and opened the fridge, inside which all the books she kept taking with her by mistake every time she visited it so as to make a toast were to be found.

“And that’s your lesson for today, never to be greedy again!”, the other electrical appliances told her. Red with shame, she took the books from the fridge and diligently placed them in the last bookshelf.

From that day she made the commitment to stop visiting the fridge so frequently.