The scale that calculated everything wrong

A MECHANICAL SCALE that once lived in a household always goofed up when doing calculations. “It could be a pound… maybe two… I can’t say for sure”, she said every time someone asked her to weigh something. And so, the housewife avoided her every time she wanted to cook something, taking her for broken. 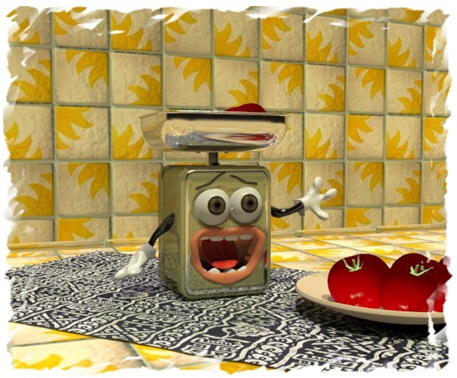 Things got really bad one day when the housewife left a brand new electronic scale next to her on the counter. As soon as our good mechanical scale realized what happened, she got jealous. “What is this electronic device doing next to me?”, she protested, and the rest of the electrical appliances in the kitchen, toasters, fridges and coffee machines burst into laughter.

“You can’t even do basic math, yet you pretend to be the scale of the kitchen”, the fridge told her with a smile. The scale simply ignored the comment; she went straight to the drawer, took out the calculator which the housewife seldom used, and started hitting the buttons to understand their function. Many hours later, and after she realized it wasn’t that easy, she came to terms with the fact that she didn’t even know the basics. “I can’t really understand when to hit ‘plus’ and when ‘equals’”, she thought. The personal computer then, who was the greatest mathematician in the whole household, suggested they have a class together, starting with addition and subtraction. Then they would go into more difficult things, like multiplication and division. So it happened. Our good mechanical scale accepted and many hours later she became an expert in all calculations.

The next day the housewife returned from the marketplace carrying ten bags of supplies, which she wanted to weigh. As luck would have it, however, she ran into a power outage, and the electronic scale which she had just bought had no electricity with which to work.

“Time to prove my worth”, our good mechanical scale, which had no need of electricity to work, thought. So, she walked over to the middle of the counter and sat right beside the bags.

“Let me use the old scale then”, the housewife exclaimed, using her to weigh a few tomatoes, cheese, as well as chicken. Our good scale did her best not to let her down; she weighed everything with unbelievable accuracy, finding the exact quantities just as she had bought them in the marketplace. The electrical appliances burst into applause and the mechanical scale became very proud of her achievement.

From that day on, there was nobody to be found to ever question her usefulness again. Many years later, together with her good friend the personal computer, they even won a trophy in a math competition.