The avocado and the scale

THERE WAS ONCE AN AVOCADO that really loved butter. “But it’s so yummy!”, the avocado would say, grab a slice of bread and cover it with thick butter before devouring it. Now and again, it would tuck into the butter pot and eat it straight with the spoon, having no second thoughts about getting fat. 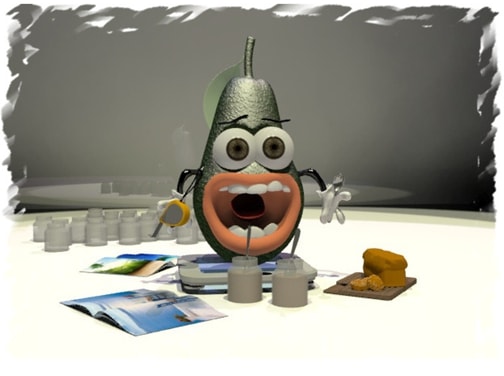 “If you keep on like this, you’ll become round like the pomelo”, told him one day the pear that was anyways used to eating small portions of food. Our good avocado however would not blink an eye. Then summer came and the fruit and vegetables of the grocery store made plans for their summer vacations.

“I have been following a strict diet for nine months straight so as to be able to finally make it to the beach”, said the tomato with pride. “I, on the other hand, had to go without little in order to be in shape again”, said the pineapple that really loved summertime. The avocado trembled and shook with fear as soon as it stepped on the scale however, realizing that it had put on weight.

“If I maybe go on a strict diet until it’s time for the beach…”, he thought and then decided to do with less food. Only a few minutes later however, and it would once again go for the butter pot.

And then the next day, the scale would show he had put on even more weight. And the day after that. “Maybe if I no longer eat bread with my butter…”, mumbled the avocado and decided from that point on to eat butter straight from the pot.

Day by day, the scale would go up instead of down. Until the time came when the avocado decided to only eat butter and nothing else, so as to both lose weight and stick to his little indulgence.

A week later, the avocado went on the scale for a final time to see the results. “Why am I not losing weight?”, he exclaimed as soon as he saw the indication on the scale. No sooner had be finished his phrase, than the scale broke from the weight and tore into pieces.

“Maybe it’s because you’re eating butter non-stop!”, mocked him the fruit and vegetables of the grocery store, pointing to the empty butter pots that were thrown away all over the kitchen. Our good avocado went red with shame and decided from that point on never to eat butter again for the next year. From that day he even decided to only eat healthy foods and avoid fat.

As for the extra kilos? They were gone before he went on vacation, as with the right diet, everything is possible.