The raspberry that was afraid of yoghurt

THERE WAS ONCE A RASPBERRY in a grocery store that felt disgusted even in the thought of yoghurt. He had heard much about its taste, never to get into the trouble of tasting it himself, but the very idea that he would one day have to swim in a dairy product made him feel very uncomfortable. “Best avoid fats altogether”, he would say to the other raspberries in the jar. 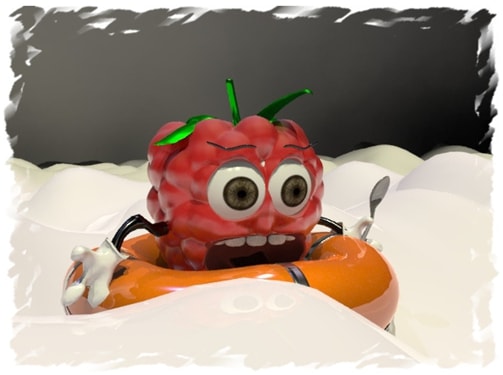 The raspberry uses a life donut to swim in the yoghurt

“It is very tasty, mind you”, a raisin that resided in a jar nearby told him. “It’s very chilly, especially when it comes out of the fridge, like coming out of the sea in summertime”. The raspberry wouldn’t listen however, and would rather think of ways to avoid his fortune.

Until the hot day when the landlord opened a can of fresh yoghurt and left it just next to the jar with the raspberries and the raisins. The raspberries then moved into positions and started diving in the yoghurt one after the other. Our good raspberry however whistled his way out to avoid it. “We’ll all dive. You’ll be alone in the end”, the other raspberries told him with a single voice, then jumped straight in the can.

“Alright, I’ll do it. But just to make sure I don’t drown, I’ll use a life donut”, the raspberry replied, and after fitting the life donut around his waist, he closed his eyes and gave a big jump.

No sooner had he touched the surface of the yoghurt, than he against started to feel uncomfortable. “How can they”, he wondered, seeing the other raspberries and the raisings swimming around and playing water sports. Not being able to move a muscle inside the life donut, he rather stood there and stared at the others having fun.

A few minutes later however he felt jealous. “Maybe I shouldn’t have brought the life donut”, he mumbled and started having second thoughts, only to get doubts again.

“The yoghurt is light and yummy!”, told him the other raspberries and the raisins as soon as they saw him moving. “And how do I know?”, he replied.

“Well, you can at least try!”, they replied, and handed him over a tiny spoon. After giving it a little thought, he sank it in the yoghurt and tasted it. The cool yoghurt, with all the raspberries and raisins swimming in it, had become so tasty that reminded little of the intense taste of dairy products. So excited was our good raspberry, that after two or three spoonfuls he decided to throw the life donut and the spoon away and to swim carelessly in the can.

The other raspberries were so delighted to see their good friend overcome his fears that they played volleyball games with him. And our good raspberry in his turn loved yoghurt so much that he never even searched for his life donut again.