AN EXOTIC FRUIT THAT CAME FROM CHINA happened to love Greece so much that she one day decided to come and stay permanently. “My name is Lee-Chee, and I come from distant China!”, she said to the fruit and vegetables of the garden, who greeted her with warmth. 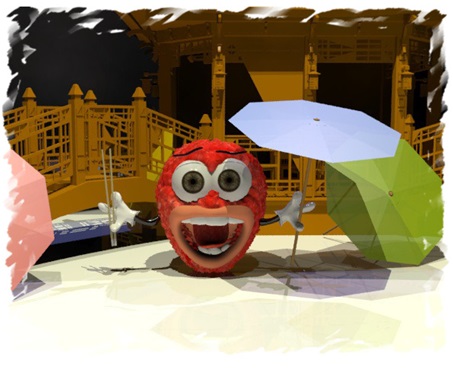 The first days she found it really hard to adjust herself to her new reality, though. So, she kept all the habits she had in her country of origin: she ate rice with chopsticks, bowed out of courtesy every time she met someone new, and carried colorful umbrellas with her every time she went for a walk around the garden. At times, she would often take a nap in unusual places, just like she did back in China: in the park, at school or οn the bus.

Τhe fruit and vegetables of the garden thought she was weird. As all these habits were rather unusual to them, they avoided her. “She most likely comes from some uncivilized or insignificant country…”, they gossiped to each other, full of curiosity as to what was really going on.

One day however, the tangerine who wanted to learn Chinese approached her and asked her to teach him the basics. She agreed, but in exchange asked him to tell her more about Ancient Greece. No sooner had the tangerine said 'yes', than the curious fruit and vegetables of the grocery store gathered around them to hear what they had to present.

“Greece’s history goes back waaay long into the past”, said the tangerine, adding: “…coming to think of it, so does China’s”. The other fruit and vegetables agreed and searched through dusty tomes to confirm. It was true.

“There are many great philosophers, like Plato and Aristotle”, said the tangerine, and added: “And the Chinese have Confucius and Lao Tzu”. The fruit and vegetables got even more excited to hear it and searched through philosophy books to learn more.

“We have the Parthenon, one of the great architectural wonders in the world”, boasted the tangerine. “But the Chinese have the Great Wall which is visible from the moon!”, he exclaimed full of enthusiasm. Yet again, the fruit and vegetables double-checked in books about architecture to confirm it was true.

And so, they kept on for hours, mentioning what each great civilization had contributed to the arts, sciences and literature. After a thorough analysis, the tangerine eventually told Lee Chee: “I kept my part of the deal. Now it’s time for you to teach me a few basic Chinese words. Tell me then how to say ‘Greece’ in your mother tongue!”.

Lee Chee then took a piece of chalk and drew two ideograms on the chalkboard. She said to the other fruit and vegetables: “From ancient times, we call Greece ‘Xila’, which means… the other great civilization!”. So excited were they to hear her answer, that they burst into applause.

From that day on, the fruit and vegetables of the garden welcomed Lee Chee to their company and asked to learn more about China, realizing there was nothing uncivilized or insignificant about habits they had not heard of before.