The marker who drew red lines

A red marker that once lived in a classroom had the bad habit of always picking a fight with others over trivial issues, only to get over it a few hours later. The other school supplies avoided him, as they considered him ill-mannered. As no one wanted his company out of fear of quarreling with him, he was often left alone during school breaks and the various games they played in the schoolyard. 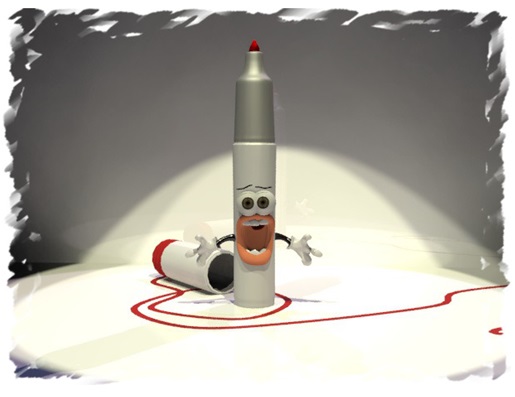 Things got really bad when one day the teacher asked the sponge to sit next to him on the same desk. The marker, who was used to being lonely all the time, thought the sponge would take up all the space for himself and take his things without asking. So, as soon as he welcomed him, he immediately drew a red line in the middle of the desk so as to split it in two. “Do not cross the line under any circumstances”, the marker said.

The sponge got so pissed off to see the red line that he didn’t exchange a single word with the marker for weeks straight, despite the fact that they were seated one next to the other. Used to always fighting with others, the marker on the other hand kept drawing red lines wherever he went so as not to be disturbed. The other school supplies couldn’t help but wonder.

Until the day came, when they all decided to get together and play football in the schoolyard. When they started exchanged passes, they instantly excluded the marker, out of fear of quarrelling with him. When at some point the ball happened to reach his feat, however, he got so excited that he did everything to keep it in his possession. So, he ran towards the opposite goalpost, aspiring to be the one and only goal scorer. When he saw the ruler, the sharpener, the pencil and the calculator, all players of the opposite team, approaching to steal the ball from his feet, however, he got so terrified that he instantly starting drawing red lines on the ground. So he drew… a rectangle, as the ruler approached him from the front, the pencil from the left, the calculator from the right and the sharpener from behind.

As soon as they saw the rectangle, the school supplies stopped. Nobody dares to cross the red lines as they knew that if they did, the marker would pick a fight with them for it. And he, on the other hand, remained trapped in it with the ball in his feet, as he knew that if he crossed the red lines, they would steal it from him.

So the time passed and the school supplies got very disappointed that their game stopped in this rather weird manner. Seeing that it was almost night, they left the schoolyard and went home to sleep. And so the sun set, and the marker was left all alone with the ball in his feet, but no players to play with.

“I got trapped… is there anybody here to set me free?”, he asked as he finally came to terms that he had been left alone in the rectangle. Out of stubbornness, though, he didn’t dare walk over it and leave. When at some point the sponge heard his voice and came towards him, the marker told him: “Please do me a favor and erase the red lines so I can be free”.

“I will not do that. How about we draw even more and play tic-tac-toe instead?”, the sponge replied then gave the marker a helping hand so as to set him free. He got very relieved that somebody finally came to help him get out of the dead end.

Then he drew an extra two lines at the end of each corner of the rectangle, exactly the amount they needed so as to play tic-tac-toe, marking the movements of each player with “O” or “X”. As soon as three “X”s were formed in a row, he drew a red line to unite them.

So much did they enjoy their game that from that day on they became inseparable. The red marker learned his lesson, as he realized that the red lines are more useful when they unite rather than when they keep apart.