The gloves, the rose and the hedgehog

TWO WORKING GLOVES that once lived in a garden were very famous for their diligence, as they used to spend countless hours taking caring of the various different flowers and plants of the garden. They took care of everything, except the one and only precious rose of the garden, which had thorns and which they were afraid of touching so as not to get pierced. 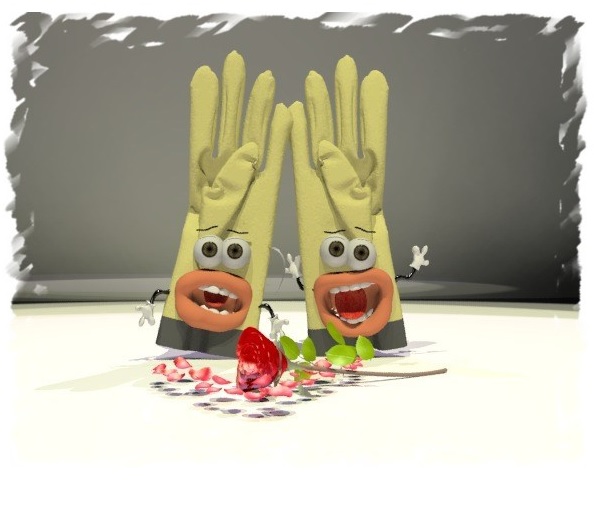 One morning, they accidentally happened to wake up later than usual. As soon as they got to work, they were confronted with a most unusual sight: a hedgehog had crossed the fence and sat right at the center of the garden, where he lay asleep.

The gloves got very scared to see the animal. “He’s full of thorns!”, they exclaimed and started thinking of ways to get rid of the hedgehog without getting pierced. After thinking about it thoroughly and seeing he wouldn’t wake up, they took a broom to push him from a safe distance. In vain, however, as the hedgehog simply switched sides and kept sleeping and enjoying the warmth of the Sun’s rays.

“Wake up mister Hedgehog!”, they shouted at him, yet he wouldn’t move a muscle. Seeing each and every one of their tricks fail, and as they were still afraid of getting closer, they thought of spraying him with the water hose.

So, they went to the other side of the garden, picked up the hose, brought it next to the hedgehog and turned the water faucet that the hose was attached to, dousing the hedgehog who… seemed to rather enjoy it, and kept his eyelids shut. “He won’t wake up not even for a second!”, the two gloves shouted angrily, and threw so much water on him that they flooded the garden.

“We just made a mess…”, they, then, admitted in disappointment, and seeing the hedgehog was still snoring, went back to the faucet to close it. As soon as they returned, they were amazed to see the garden filled with caterpillars, worms and other insects that swam in the water so as to devour any flower or plant that stood in their path. Yet, the hedgehog kept sleeping.

The gloves then got terrified in the idea that all their hard work would be destroyed, and instantly reached for the broom. Yet, the more they hunted the insects in the garden, they more they got away and soon the garden turned into a battlefield, filled with plants and flowers that were either soaking in water or half-eaten by the hungry caterpillars. The only thing that was left standing was the one and only rose of the garden.

“Our garden is… destroyed…”, the two gloves exclaimed as soon as they realized their hard work had gone down the drain. And then, they saw a caterpillar jumping on the rose to devour it.

Without hesitation this time, they did the same. And so, they got pierced and bled by its thorns, yet so afraid did they get that the caterpillar would eat them too, that they grabbed the rose and ran in the garden to escape their bad luck. Along with them ran the caterpillar, together with all the other insects that had gathered behind them being so enchanted by the rose’s beauty they couldn’t resist the temptation. The more they ran, the more the rose’s smell filled their nostrils and intoxicated them.

As soon as the smell reached the hedgehog’s nose, he woke up. “What a beautiful smell, but the flower is even more beautiful!”, the hedgehog exclaimed, and got angry at the garden’s insects for wanting to devour it. Half of them he ate, and the other half he forced to run as fast as they could to get away. The gloves clapped loudly as soon as they saw the hedgehog take action to save them.

“Thank you for accommodating me with my breakfast”, the hedgehog told them as soon as he got rid of all the insects, and with those words thanked them and then left for his morning walk.

As for the gloves? So happy were they that their garden was again clean from all the insects and bugs, that in the following days they worked twice as hard to bring it back to its former glory.