The monkey and the banana tree

JOHN WAS SITTING WITH HIS GRANDFATHER one night, when he asked him: "Grandpa, how come monkeys have longer hands than humans, yet they need to climb to reach the tall trees?". His grandfather then replied: "Let me tell you a story John. This one, I've heard from my grandfather as well."

Back in the old days it is said that monkeys were like humans. There lived a poor peasant in a small village, far away from here, who's house was derelict. He even had no horse, not even a cow to produce milk for him. Not even firewood to keep him warm for the winter. 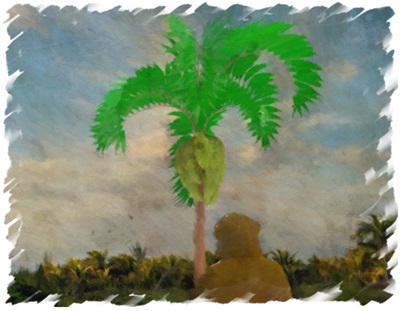 One day he took an axe and went to the forest. He there found a banana tree which caught his interest. When he reached to get a banana, he thought it would be best if he tore the tree down so as to get firewood from it as well. Seconds before his axe the trunk, the tree spoke with a human voice: "I will give you what you want. You might not have riches, or a wife, but I'll give you all."

"Very well", the peasant replied. "I want to be richer than all the peasants. For I have neither a horse, nor a cow to milk". The banana tree then replied: "Go back to your house, and great riches will wait you at the door".

So it happened. He went back, and found bags filled with gold coins waiting for him at the door, as well as a horse in his stables and a cow. A few days later, his wife, who was poor and ugly for a lifetime, got really spoiled from the riches and started complaining. The peasant then thought: "Maybe I should ask the banana tree to give me another wife".

So he went back to the forest and searched for the tree again. Yet again he reached out to chop it, but just before hitting the trunk, he ordered the tree: "Give me a beautiful wife that cares little about riches, and never complains".

The banana tree replied: "Go home and you will find what you want". He went back to find a new wife waiting for him at the door, who, as promised, was of unparalleled beauty and who never complained. So, the days passed, and the peasant enjoyed his good fortunes, until he thought to himself: "Riches are nice, and my wife is even nicer, but I have a King to obey".

And so, he went back to the enchanted banana tree. "What is it you want this time, peasant?", the banana tree asked. "My precious tree", he replied, "I've enjoyed the riches and the warmth of my new wife, but I want to have nobody above my head to give me orders. Can you make me the King instead?"

The tree then replied: "I can make you a Lord, but not a King". He accepted and went back home, where a letter awaited him. He was given a nobility title, as well as a Castle to live in, along with huge acres of lands and servants to tend to them and do his bidding. No matter his good fortune, however, he was yet to feel satisfied.

So he went back to the banana tree for a last time, carrying his axe, saying: "It's nice to be a Lord and have others to give orders to, but I want to be a King. How could this not be possible?"

The tree then replied: "You are a fool. You were a peasant and became a noble Lord, with a beautiful wife, riches, a palace to live in, as well as fields and servants that take care of them. I won't make you a King, as only God decides that."

So angry was he to listen the response, that he hit the trunk of the tree with his axe. The tree then told him: "Since you are stubborn and never to be satisfied, you will lose it all. I'll transform both you and your wife into short monkeys that sweat to get my bananas".

So, he got transformed into a monkey, along with his wife. And since that time, they both have long arms and a tail, and they have to sweat to climb the banana tree to get something to eat.

The grandson then asked: "Grandpa, could this be a true story?". "Well, in reality, it's just a legend. Don't dream of the unattainable, and be satisfied with what you have. Or rather... do not bite off more than you can chew, as the saying goes", his grandfather replied.