The mushroom that never took an umbrella

A MUSHROOM that once lived in a grocery store made a bad habit out of leaving the house without taking an umbrella with him. 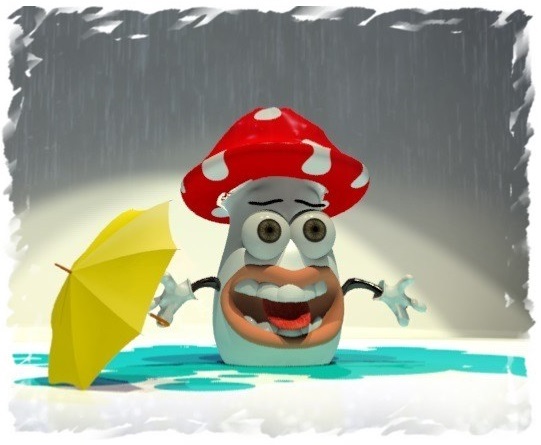 One moody autumn day that the clouds started gathering in the sky, the fruit and vegetables of the grocery store happened to receive an invitation for a pajama party that would take place at the other end of the garden. Our good mushroom found it strange to see them wear raincoats on top of their pajamas and take umbrellas, as he could still see the Sun behind the gray clouds that were smudging the blue sky. “I’ll see you there, then!”, he told the other fruit and vegetables, and left for the party wearing only his pajama and without taking an umbrella.

No sooner had he walked a few meters, and the first raindrops fell. “It’s just water!”, the mushroom told the other fruit        and  vegetables         he     met  on the way,   even laughing at them for opening their umbrellas, as thanks to his shape that looked like a hat, he had a natural protection from the rain. Half-way through, however, the clouds started pouring.

He, then, thought of hiding behind a tree so as to wait for the rain to stop. “It’s natural for it to rain during  Autumn, anyway!”, he told the other fruit and vegetables that were passing in front of him, wearing boots for the mud and raincoats to protect themselves.

Seeing the rain wouldn’t come to a pause, he thought of coming out of his hideout and continue on his way. “All I need to do is to be cautious so as not to get the pajama wet”, he thought to himself, then did the best he could to get to the party, alternating between running and seeking cover below the foliage of trees underway. When, at some point, he reached the other end of the garden, he was relieved to see the house where the party would take place.

No sooner had he walked another two meters, however, and a thick cloud moved right above him, and showered him with a ton of water from tip to toe. “Looks like you came to attend a pool party instead of a pajama party!”, the other fruit and vegetables told him, just as he was closing the door to escape his fate, and they all burst into laughter. They, then, gave him a towel, and dry clothes to put on so he wouldn’t feel cold.

Since that time, and after learning his lesson, he never left the grocery store without an umbrella, or laughed at those who wore boots and raincoats to keep themselves safe from the rain.