The steam iron and forgotten dreams

A STEAM IRON was once very diligent and always wanted to have the clothes ironed to perfection until the last wrinkle was gone. "You 're a WORKAHOLIC!", the other appliances told him each time they saw him ironing the same clothes over and over. And so, he worked day and night, never to run out of work. 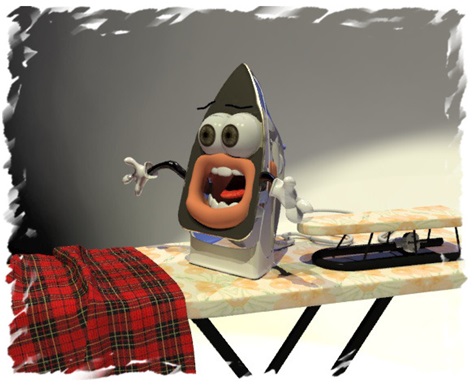 One hot summer day, however, the washing machine that was used to working only at specific schedules complained about the iron's habit of working non-stop: "If only the iron had finished his work on time, we would have all gone to the beach earlier", he said and the other electrical appliances agreed, as they were also tired of always waiting for him to finish.

"I can't possibly leave the clothes like that", the iron replied, pointing to a heap of clothes taken straight out of the washing machine. He, then, took a white shirt out of the heap and made a display of his skills in front of them, only to see them leave him behind and head straight to the beach. As they headed there, they couldn't stop thinking of ways to make their friend overcome his working addiction.

So, they thought of the following: they would replace his ironing board with one used for surfing. On the surfing board they would leave a note, explaining that they wanted him to be their friend and join them in their activities. So it happened: the very next day the iron woke up to find a surfing board in the exact place where he usually left his ironing board. Curious as to what was happening, he took the note they had left and read:

"My dear steam iron. What I forgot to tell you is that I am no ironing board; in reality, I am a surfing board that lost its capacity for dreaming. What I want from you the next night that the sky is clear is to take me to the nearest beach, so I can see the moon and the stars light the sky once again".

As soon as he finished the letter, tears flooded his eyes. "You win", he told the other appliances, remembering that it had been years since he had first started working nonstop, to the point where he had forgotten what it even was like to dream.

And so, instead of spending yet another night ironing clothes, he took the surfing board to the nearest beach where he enjoyed the moonlight and took a relaxing boat ride so as to remember all the dreams he had been neglecting all those years.