Beach volley and the game console

A GAME CONSOLE that once lived in a household loved videogames. “Each new week finds me finishing a new one”, she used to say and pile up boxes of videogames in her room. Each time a new videogame fell in her hands, she would get excited in the beginning, only to end up being bored a couple of days later, throw it away, and remember about it only when she had run out of new videogames to buy. 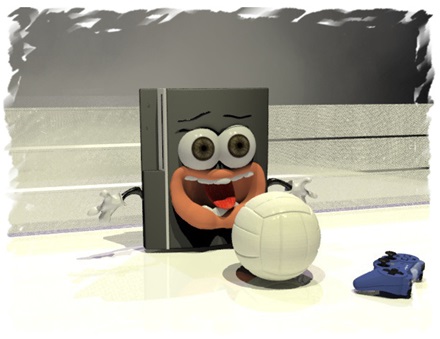 When summer came one day, the electrical appliances gathered their swimwear to go to the nearest beach. The game console reluctantly joined them, thinking that she would have rather been left behind in order to enjoy playing the newest video game she had bought that morning. “How will we pass time there?”, she asked just as the dishwasher, who really enjoyed playing games on the beach, was passing in front of her. “I promise you’ll have the fun of your lifetime!”, he told her, showing her a volleyball that he was carrying. In the end, they got her round to their point of view, promising that they would soon be back so she could devote time to her new videogame.

As soon as the electric appliances reached the beach, the dishwasher took the volleyball out from his bag. Yet, the console still wondered how they could possibly pass their time with just one thing to play with. “Catch!”, the washing machine told her and threw the ball. She jumped to catch it, then clumsily fell in the water and swam after the ball as it floated away. Seeing that she was having fun, they threw the ball at her again and again so she would try harder.

“You need training!”, the vacuum cleaner told her and joined their game. Then they all gathered around the ball, split into teams and started playing ‘dodgeball’. The only one not to join them was the video camera who remained outside to film their game. And so, time started passing quickly, until our good game console completely forgot the video game that was waiting for her back home.

“Would you mind if we stayed behind to train?”, she asked the dishwasher when, at some point, the other appliances got tired. As he loved beach games, he happily agreed. After walking in the sand for a few minutes, they came upon a small court with a net. “Whatever you do, don’t touch the net”, the washing machine told her and then showed her the basic techniques of volleyball: how to serve the ball and how to jump high so as to pass the ball back. The game console soon became so excited that even more hours passed, until it was finally night and they had to stop as they could barely see. So, they all packed their bags and went back home.

As soon as they opened the door, and before they had even had the chance to wash their swimwear, the game console went straight to play the video game she had bought the morning of the same day. It was a video game about beach volley, in which she could perform all the cool techniques she had just learned while playing on the beach. Yet, this time she wouldn’t even have to move a muscle, only push the buttons on the gamepad.

After a while, she gave up. “It’s not like the volley we played on the beach…”, she complained. “Correct”, said the dishwasher, who happened to pass from right in front of her that moment, and added: “It’s because beach volley is not only about technique but also about passion”. As soon as she heard it, our good game console realized she had spent an awful lot of money in buying a game that offered her less than the real sport, which was of course for free.

From that day, she decided to follow the other appliances to the beach, where they enjoyed all sorts of fun games using the volley ball. And even in the winter months, when the sea water is cold and uninviting, she kept improving her skills at the nearest indoor hall along with other athletes who shared her passion.