A FAN once used to work very hard during summer time. "Diligence is the mother of good luck", he used to say to the other appliances in the household, never to complain. But as soon as winter kicked in, he quickly ran out of work, as the housewife no longer needed him. 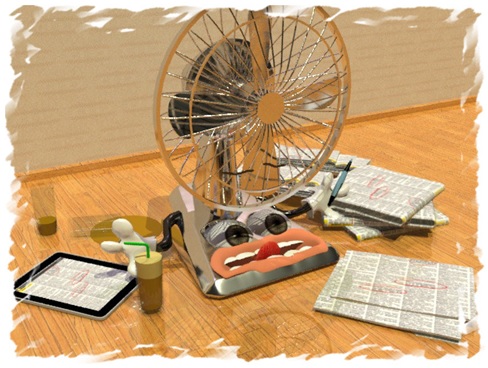 "It's enough for me that I worked hard during summertime", he justified himself during the autumn months. After a while, however, he got bored and by December he already felt time was passing very slowly. So it happened that, one December when nobody asked for him, he eventually started looking for a winter job. "It's no good if I waste my talents like that", he thought.

He, then, went to the nearest newsstand and bought a newspaper full of job ads, as well as a red marker. No sooner had he finished reading through the ads, however, than he was let down, as nobody was asking for an air fan. "My skills are under - appreciated", he murmured and the other electrical appliances burst into laughter to hear his complain.

"If you really want a job you should migrate to Arabia where it's always hot", the heater told him angrily. Then the rest of the appliances confirmed his worse suspicion: nobody would pay a fan during winter, as it was always cold and what they really needed was radiators, gas heaters and wood for the fireplace. Yet, he continued looking through the ads, only to come to terms with reality a couple of days later: "Perhaps then I should migrate".

He, then, put the newspaper aside, and made the bold decision to move to Arabia. "Best to leave than stay unemployed forever", he announced to the other appliances as he packed his baggage.

And so, the news spread quickly. Soon enough there was no appliance that wasn’t surprised to hear that their good friend was about to leave for another country. Just before he was about to board the plane, however, he was stopped by the words of an electric heater: "I have a very interesting business plan for both of us, should you wish to hear it".

She, then, explained how they would set up their own greenhouse company, and how a skilled fan like him would be needed so as to recycle the air within the greenhouse. "I think you're the perfect match for this job", she persuaded him.

So, they put two and two together, and she cancelled his flight. They prepared their own business step by step, in which the fan would manage the air going in and out of the greenhouses, and the heater would control their temperature.

Months later, and after they had secured a solid customer base and built so many greenhouses that they barely had enough time to rest, they got to the point where they had to hire others. "I'm a business man now", boasted the fan to the other appliances every night he got tired back home. So much did he even come to love this new adventure he had embarked on, that he never, ever had to search for a job in a newspaper again and the other appliances held him in very high esteem.