The fridge that had a fever

A FRIDGE that once lived in a household never felt cold. No matter how cold it got outside, and even indoors, he thought he could withstand the lowest temperatures, so he never wore thick clothes. “Feeling cold lately?”, he kept asking the other electrical appliances in the household, who preferred to stay in the company of the heater. 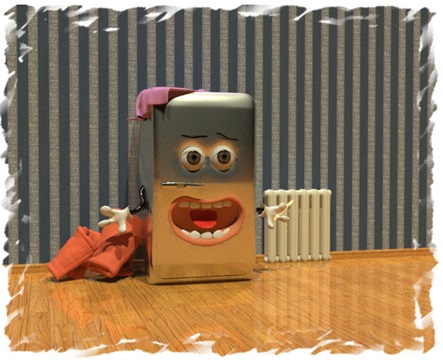 One cold winter day, however, that he looked outside the window, he saw everything covered in snow. The other electric appliances got so excited that they wore thick sweaters, knit caps and wool scarfs to get out and play. The fridge, on the other hand, who thought all these were unnecessary, simply went out of the house with no clothes on. The other appliances got really jealous, as they already knew he could tolerate the coldest of temperatures and could have as much fun as he wanted without getting wrapped up like an onion.

“I don’t need any of these”, the fridge proudly told them. He, then, used his bare hands to gather the snow below his feet and to mold it into big snowballs with which he built a snowman. After shaping the body, he used tree branches for the hands, a carrot for the nose, as well as a knit cap and a scarf that he placed on the snowman’s head. The rest of the electric appliances got so excited with their play that they only went back home when the cold was unbearable and they were afraid to stay outside any longer. After shaking the snow from their caps and scarfs, they placed them in front of the fireplace and gathered around it to tell stories. The fridge, on the other hand, remained outside in order to finish his masterpiece.

The next day that he woke up, he looked out of the window to marvel at his creation: the snowman awaited him with a bright smile on his face, exactly as he had left him. As he was looking outside the window, however, he felt like sneezing, and the electrical appliances gave him a weird look: “Are you cold…”?, they asked him, receiving no answer from him. As the day went on, however, he kept on sneezing and feeling weaker by the minute.

“It’s probably best if I lay down, if you don’t mind”, he told the other electric appliances as they put on their clothes to go out and enjoy the snow once again. They, then, started suspecting that he had gotten sick the previous day that he went out of the house with no heavy clothing. Seeing him sneeze once more and catch his forehead, they gave him a thermometer. “Our good friend the fridge has a fever. You can go outside, but make sure you wear sufficient clothing!”, they advised the rest of the appliances as soon as he handed it over back to them.

“The fridge has a fever!”, the appliances gossiped among themselves. They even found it really strange, how it could be possible for a fridge that is so used to freezing temperatures, to get sick from going out in the snow unprotected. And so, our good fridge spent the rest of his day lying in bed and staring at the other appliances outside through his window, whereas his friends went out for a second day to enjoy the snow. “What a pity I can’t see my snowman without getting to the window”, he whispered with a sad look on his face.

The night, and as soon as the other appliances got back home, they visited the refrigerator, who was sound asleep. “He got really jealous that you were outside with his snowman, whereas he couldn’t possibly move from bed”, the thermometer told them.

The next day that the fridge got up, he took great delight in what was waiting for him right outside his window: the other appliances had brought his snowman right next to him so as to keep him company while he was staying in bed. They, then, waved at him from outside so as to give him courage.

So, our good fridge patiently waited his recovery, with his snowman waiting for him just outside the window. As soon as he was sure he was well again, he wore a wool sweater, a colorful scarf and a knit cap big enough to even cover his ears, and went out to enjoy the snow along with his friends. And they all lived happily ever after.

Since that time there has never been a single occasion that he went out in the cold again without proper clothes.