A DEEP FRYER that once lived in a household held her fried food in very high esteem. “I’m the most talented cook, as my fried food is the tastiest in the world”, she used to say to the other appliances in the household, and every time she and the kitchen stove cooked, they preferred her fried potatoes over the stove’s dishes, which they thought were tasteless. 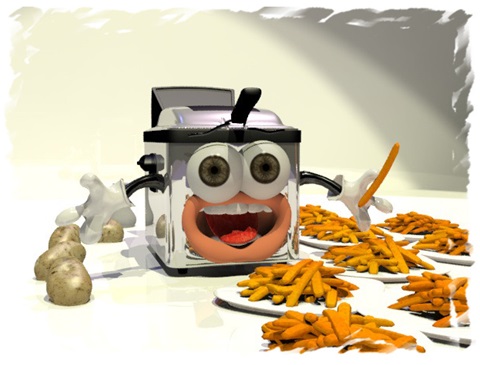 “It is me who is the best cook in the world, as I know how to cook many and different dishes and not only ‘easy’ French fries like you do”, the kitchen stove angrily told her one day that she had cooked lentils which no one had eaten. “You think”, the fryer told her. “I am a natural talent. Let’s have a contest then to see who is best”, she told her, confident that she would be the winner, as her fried food was very popular. As soon as the other appliances heard it, they got so excited that they gathered around them. The kitchen stove accepted the challenge and the appliances decided on two judges: the greedy toaster and the trash bin.

“Will the contestants move into position, please”, the judges said. Both the deep fryer and the stove wore aprons and sat right beside each other, behind a counter with all sorts of cookware and ingredients.

“For the starter, we want you to cook for us something from the world of vegetables”, the toaster said. So, they decided to cook eggplants: the deep fryer fried them, whereas the kitchen stove cooked them in the oven. After a while they both delivered two big plates filled with freshly cooked eggplants.

“Next, we want you to cook something related to poultry. Maybe add potatoes as garnish”, the toaster said. And so, they cooked chicken: the deep fryer fried the chicken wings and complemented them with French fries, whereas the kitchen stove cooked the chicken in the oven. As soon as they had finished, they let two big plates with their creations on the counter.

“It’s clearly a draw”, the trash bin and the toaster said. The other electrical appliances agreed, as the roasted chicken was so tasty that it could easily be compared to the French fries of the fryer. So, they both won a point for the second round, the deep fryer having already won the first one.

“For the third and last round, we would like you to cook fish”, the toaster told them.

The fryer, then, took freshly cleaned pieces of fish which she fried until they got crispy, then filled the rest of the plate with the French fries that were left from the previous round. “I’ve cooked an English all-time favorite: Fish and Chips!”, she said to the other electrical appliances who craved the plate that was in front of them.

“On the other hand, I thought I’d make a fish soup which is the most delicious food in the whole world”, the kitchen stove said. She, then, split the steaming soup that had just come out of the pot into a dozen bowls, enough to accommodate everyone. Along with the potatoes she had also cooked carrot, celery, onion, egg and lemon, just as the recipe book suggested. She put all her talent in it, as fish soup always needs proper preparation to be done right.

“Our winner is quite clearly the kitchen stove in this round”, the judges agreed. “It’s a draw then, as the fryer won the first round”, they added and decided to stage an extra round so as to decide on who would win the prize.

“It’s not needed!”, the electrical appliances told them with excitement as they tried the fish soup. As soon as they licked the last drops from the bowls, they raised the kitchen stove in their arms and declared her the winner of the contest. So impressed were they even by the taste of the soup, that from that day on they had her cook the recipe at least once a week.

Our good fryer, on the other hand, who always thought that easy, fried food is tastier, patiently waited until the crowd had dispersed so she could safely try the fish soup and decide whether it was indeed worth it or not.