The telephone that rang all the time

A TELEPHONE that once lived in a household used to ring all the time, never to let the other appliances rest. "You should be glad you have me to always keep you up to date with what is happening in the outside world", the telephone justified himself. And indeed, every time it rang, the housewife rushed from the other side of the house to get it on time. 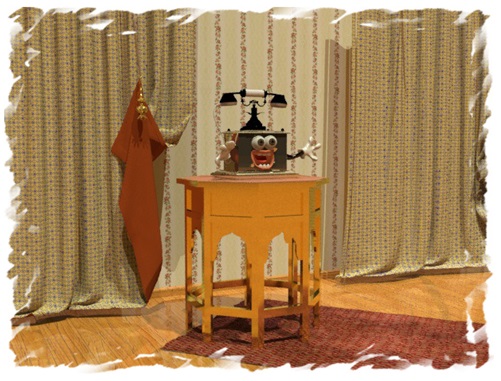 "Must be some kind of bad joke", the television told him one day, "everyone knows I am the one that brings the news in this house".

"Yes, but it is me that the housewife trusts with her most personal issues", said the telephone, and both appliances started fighting as to who was most valuable in the household. At some point the debate got really heated, and they started shouting at each other. The telephone rang as loud as possible, and the TV increased her sound to the maximum as well.

"Will you both ever stop?", the fax, who was anyway usually out of use, told them after a while.

"Not unless he admits the housewife learns everything from me first", said the telephone.

"The only thing she learns from you is useless gossip, whereas I tell her only the most important of news...!", the TV replied.

No sooner had they finished their quarrel, than a postman rang the doorbell. The housewife rushed to open the door on time so as to get a carefully sealed yellow envelope with a German stamp on it.

"You made my cry, my silly girl...!", she said, tears flooding her eyes. Within the envelope she found a letter from her granddaughter who was now living in Germany, filled with beautiful photos, as well as a lovely postcard that read "My dear grandma, I miss you so much!".

"Nothing can be compared to the handwritten letter, like the good old times", she whispered as she got back in the kitchen to put on her glasses and read it carefully, and the telephone and the television went red with shame to hear it.