The walkie-talkie that always said "no!"

A WALKIE-TALKIE that once lived in a household had made a bad habit out of always saying no to each and every suggestion. "No... no.... no, it's definitely a NO!", was his answer to everything the appliances proposed. After a while, they started taking the answer for granted and made plans without him. 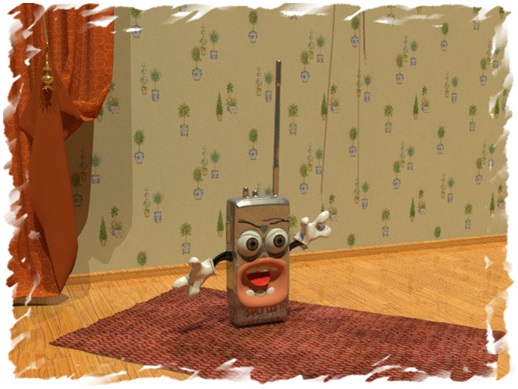 Things got really bad when one day they went on an excursion without telling him, thinking he would have anyways rejected the invitation. As soon as they were back, however, they found the walkie-talkie waiting for them at the door. "How rude of you not to invite me", he complained.

The appliances then held a meeting in the kitchen to see what they should do with his case.

"He doesn't even bother listening to what we have to tell him", complained the radio, who always felt ignored every time he tried to share the news with the walkie-talkie.

"I've been met with rejection every single time I've tried to give him the big picture", added the television.

"And every time I invited him to watch a movie, he turned me down", added the dvd. "Maybe it's not even worth trying".

"My impression is, that we haven't found... a communication channel yet!", the telephone, who had dealt with similar cases numerous times in the past, told them. So, they thought of a plan: each time they suggested something and the walkie-talkie said 'no', they would ask him to counter-suggest. Instead of losing heart, they would provoke him to start a dialogue.

So it happened. The next day they planned an excursion in the woods nearby, they asked the walkie-talkie to join them. As soon as he said 'no!', they asked him to make a counter-proposal to his liking. He, then, got really confused, as he was used to always seeing others sulk and walk away in disappointment. This time, however, he found himself in an awkward position: on one hand, he had nothing to suggest, and on the other, he feared the appliances would get back at him by saying 'no'. Suddenly, the whole idea of going to the woods seemed fantastic.

"Let's go where you want...", the walkie-talkie told them, realizing that there was no point insisting on turning everything down, and the other appliances, with the telephone first, were really happy to accept him in their company.

From that day, and each time a 'no' comes their way, they always know how to handle it properly and turn it into a constructive piece of dialogue.