The alarm clock and the vacuum cleaner

A VACUUM CLEANER that once lived in a household always started work on time, sticking to the same tight schedule every day for weeks, months, or even years. So great was her diligence, that to make sure she never overslept, she always set the alarm clock to ring at exactly 6:00 AM and placed it next to her bed so as to be the first to hear it. It then rang for each and every appliance in the house at 7:00, 7:30 and finally 8:00, until everyone was on their feet. 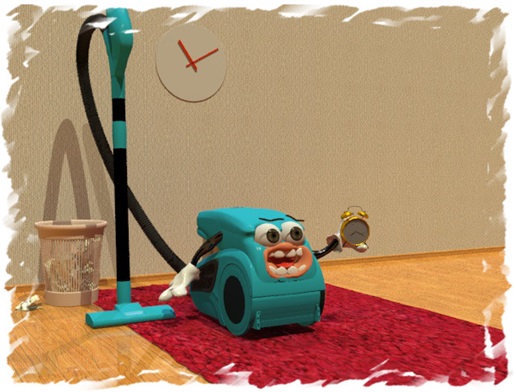 Yet, every time she swept the carpet, she made noise and woke them up earlier. "Just because she wakes up at the crack of dawn it doesn't mean we too should!", complained the washing machine that usually worked at night, and the rest of the appliances agreed, as they didn’t share her enthusiasm for daily chores.

"Don't exaggerate, she's just doing her job", said the sewing machine, who was amazed by her hard work. The alarm clock, however, who was tired of ringing so early in the morning each day, had a different opinion: "If she would only let me wake up late, just for one day!".

Seeing they couldn't stand her any longer, the appliances thought of giving her a lesson. They would patiently wait until the time she went to sleep, then set the alarm clock to ring much later. They would also make sure they would close the shutters and curtains of her room so that no light would come through to wake her up. So it happened, and for that specific day the clock was given a strict order to ring after it was already noon so they would all enjoy their sleep. As soon as they had made sure they had executed their plan unnoticed, they went straight to bed and fell asleep.

The next day that they woke up, they opened the curtains and realized it was indeed noon, just as they had agreed with the alarm clock. When they went to the living room, however, they were amazed to see… the vacuum cleaner who was enjoying her coffee. She told them: "Today the alarm clock didn't ring on time, yet, I was on my feet by exactly 6:00 as I am used to. I swept and cleaned the whole house, and sat to enjoy my coffee, patiently waiting for you to wake up and join me. It seems, however, that without the alarm clock you might as well have awoken in the afternoon!". The appliances went instantly red with shame, then laughed at their lesson a few seconds later.

So, from that day, there was no one to ever complain again about her making too much noise. And as she also took her lesson, she did her best from that day on to disturb others as less as possible so as not to wake them up.