The teacher and his apprentice

ONCE UPON A TIME there lived a well-read man in a country far in the north, who knew all the languages of the earth and all the mysteries of Creation. He even had a big leatherbound book with beautiful ornaments on it, which he had bound to a table using chains so that nobody could move or take along. Whenever he wanted to open the book, he used a key to unlock it, and whenever he finished his work, he locked it back again so that nobody could see its contents, as it contained all the secrets of the world of alchemy. It even contained instructions on how to mix the elements, how to purify them and how to convert base metals to pure gold.

The teacher also had an apprentice who has dumb yet sly, and so he never let him anywhere close to the book, or even enter the special room. Yet the pupil eavesdropped every time the teacher went inside. 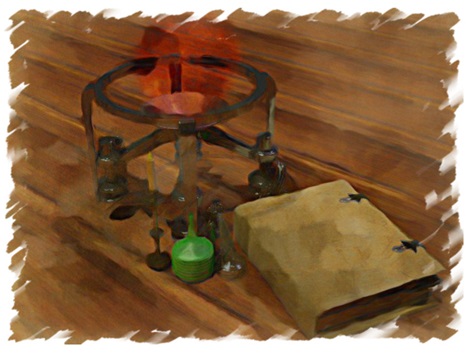 One day that the teacher left, the curious pupil, eager to test his luck in making gold, entered the room where he noticed his teacher had left the book unlocked. He browsed through the pages where all sorts of charts and instructions were to be found, until he found one that explained hot to turn metal to gold.

Without further ado and following the instructions with every detail, he took out a silver necklace that he was wearing and placed it in a big bowl that was on the table. He then placed the ingredients one by one, mixing them in the exact measure as described in the book and with great care so as not to make any mistakes. What he didn’t notice, however, was that his teacher was standing in the corner, patiently observing him without making any noise.

After mixing the ingredients, he covered the mix with a towel and waited for the amount of time determined by the instructions. He sat on a chair and waited, and he would have fallen asleep had a foul stench not reached his nostrils. He then quickly uncovered the bowl to discover a sight that made him feel extremely uneasy: instead of gold, his silver necklace had turned into… filth.

The angry student then took the bowl and threw it away, yet his teacher stopped him half-way through, telling him: “No matter how carefully one follows instructions, he will never get to produce pure gold unless his intentions are equally pure”.