The old King the and sound of the anti-trumpet

THERE WAS ONCE A KING that had become very tired of the constant sound of trumpets in his Castle. His home was frequently visited by merchants and travellers from all over the country, which caused the trumpeters at the gates to be at constant work. So frequent was the sound, even, that the servants placed carpets on the walls and the windows to protect themselves and their ears. In vain, however, as every time someone entered the gates, the sound of the trumpets reached the old King’s ears and upset him. 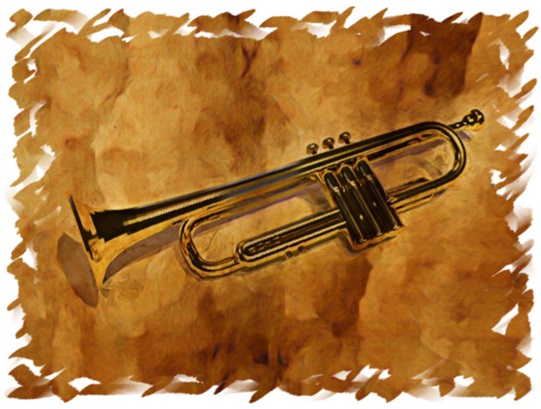 One day, however, a traveler that appeared in front of the King to sell him his merchandise, told him: “My King, I have an invention that can relieve you greatly”.

He then took a trumpet out of his bag, which he sounded in front of everyone’s eyes and ears, with no sound coming out of it whatsoever. Yet the more air he blew in the trumpet, the quieter the room got. After finishing his mysterious work, the traveler said: “I call it the ‘anti-trumpet’. It’s a trumpet that absorbs the sounds of the environment and especially all the noises around. Just one try will help you believe it’s usefulness”.

The King then tried to speak, but the stranger kept ‘sounding’ his trumpet which absorbed the King’s words and as a result nothing was heard. One after another, the servants tried to speak in front of the anti-trumpet, only to realize that it was as if no sound was coming out of their mouth. As soon as the stranger finished sounding his horn, the King exclaimed: “I will buy not only this one, but also all pieces you have with you!”.

The stranger then left the Castle with ten bags filled with gold coins, selling away all his merchandise. From that day on, the King placed guards with anti-trumpets in all the rooms and corridors of the Palace, giving them strict orders to sound their trumpets constantly. And while it was always noisy outside, not a pin drop could be heard inside the Castle. The quietness became so enjoyable that the lords of the Palace forced the guards holding the anti-trumpets to even work at night and the King even decided to have a personal anti-trumpeter while he was in the toilet or in the library so as to make sure nothing would disturb him.

A couple of weeks later, and after having enough of it, the King thought of paying a visit to his subjects in the village, so as to oversee their presence. He put on his royal clothes, then boarded the carriage and went out of the Castle along with his servants and personal anti-trumpeter whom he gave an order not to sound so that he could listen to all the complaints the peasants had. Yet as the carriage passed through the Castle gates, the same disturbing sound of loud trumpets reached his ears and upset him once more. He then headed towards the city.

When he reached the city center, a huge crowd of peasants welcomed him, who cheered loudly for their King. They even hired a band that played loud music for him and set up a whole festival around the carriage. The King, who tried to talk to his subjects and hear their problems was very upset with all the noise reaching his ears, to the point that he started missing the silence in his Castle. He then asked his personal trumpeter to sound the anti-trumpet and not to stop even for a moment before they got back to the Castle. The carriage departed and the peasants were left with their mouths open.

Halfway through, the trumpeter got tired and asked to have a break. The King accepted his request and asked the carriage driver and the guards to stop at a river nearby so they could drink water and get some rest. As the others were relaxing and making as less noise as possible, the King patiently waited in the carriage, until a sweet, unexpected melody reached his ears.

When he got out of the carriage, the guards feared they had disturbed him with their noise. The trumpeter then tried to sound the anti-trumpet, yet the King stopped him right away: “My ears enjoy silence like nothing in the world, yet it is the sound of gurgling water that is making a melody so intoxicating that is hard to resist”.