Squirrel Vergil and his little brother

ONCE UPON A TIME IN A FOREST far away, there lived a family of squirrels. Papa-squirrel and mama-squirrel loved their first child, little Vergil, like nothing else in the world, but they were not alone in doing so: everybody in the family, from grandparents to uncles showed him all their love and affection. They bought him many presents, spoiled him with all sorts of favors and lost little chance to show him the joy he brought to the family. They even loved him so much that a delicious chocolate acorn awaited him every Friday after school. 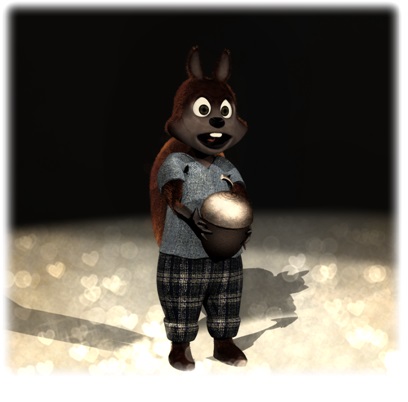 One Friday however that little Vergil got back home, he was troubled to see that mama and papa – Squirrel were nowhere to be found. He searched for his chocolate acorn, as usual, yet found it nowhere. Grandma-squirrel then showed up, who explained to him that mom and dad had climbed to the top of the Squirrel treehouse to receive his new brother from the good stork. So it happened. After two hours, Vergil’s parents returned with a big basket in which a cute little Squirrel baby was to be found. When Virgil first glanced at his small brother, he rewarded him with a sweet smile.

In the weeks that followed, all the attention of the parents and family turned towards the new family member. They took care of the little squirrel and gave them their full attention. So worried was he by what was going on, that little Vergil felt he had lost their love. He looked at his younger brother with great curiosity, trying to understand what exactly made his parents give him priority. Yet their promise was kept; every Friday after school, the chocolate acorn awaited him at the same spot.

One Thursday afternoon, it so happened that Vergil’s parents left to pay a visit to friends, and Vergil and grandma Squirrel were left behind with the young sibling. When at some point the baby started crying and grandma squirrel was busy looking after it, Vergil found the chance to sneak to the kitchen and search for cookies. He then opened the big drawer, which his mama would never let him come close to, in which he found a big, delicious acorn tied with a ribbon, along with a smaller one like the ones his parents bought for him every Friday. When he realized the big one was to be given to the baby, so jealous did he get that he instantly took it out of the drawer and went to hide it in his room. After making sure no one had noticed him, he locked the drawer again, leaving only the small acorn in place and returned to the living room. That same night he fell asleep as if nothing had happened.

When Friday came and he came back from school, he sat on the table and waited for his usual gift. When his parents opened the drawer, however, they got very scared:

“But how could this possibly be, since the drawer is always locked”, mama squirrel wondered.

“Yet the baby’s acorn is in place!”, papa Squirrel replied.

They then closed the drawer and started searching the house. They searched everywhere. Yet the only place where they didn’t bother looking was Vergil’s room, where he had hidden his present. Disappointed, they returned to the table where they promised Vergil they would bring him another acorn. Vergil, however, got so ashamed that he started crying, and his parents couldn’t understand the reason.

Grandma squirrel then said: “As Vergil is a good boy, I gave him the chocolate acorn yesterday that you were gone. Vergil, go to your room and bring the gift so your mum and dad can see it”.

So it happened. Vergil went to his room and brought the acorn that was tied with a ribbon. Then, after taking his lesson from grandma Squirrel, he thanked his parents for it. To make up for it, he shared a piece of his chocolate acorn with his young brother. And so, they all lived happily ever after.