THERE WAS ONCE A LEAD SOLDIER who was so courageous in battle that he had lost himself behind the enemy lines. And although he was delighted to see that the battle was over and that the enemy was annihilated, he was really shocked to see that his comrades were gone when he got back to the camp.

Disappointed and weary from the battle, he went on a journey to find them. He kept walking with his feet heavy, through mountains and valleys, until at some point he had gotten so tired that he couldn’t go on. He then sat down below a tree, took out his boots and placed them on the ground. A bird flew by however, quick as lighting, which grabbed the boots and flew away. 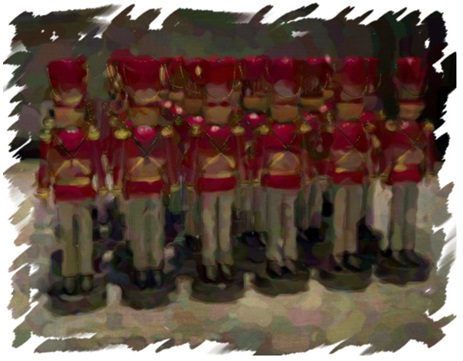 The soldier then got really scared and sorry, knowing he still had a long way to go. Ignoring his fatigue, he went on without any boots, until at some point he came across a big river which he tried to pass through. The wild wind blew, throwing him in the cold waters and tearing his cape apart. So strong was the wind, that he even lost his hat.

As soon as he had reached the opposite side of the river, the poor soldier lit a fire to make his clothes dry. He took his pants out, then his torn cape and carefully placed them in front of the fire. So relieved was he by the fire’s warmth, that he even placed his gun by his side and fell asleep. When he woke up in the next morning, however, the sight disappointed him even further: his gun was nowhere to be found, and so were his pants. The only thing that was left to remind others that he was a soldier was his cap, which was so torn that it was certain to cause laughter to others.

Yet one more time, he treaded the difficult and lonely road of return. The heat of the battle that had occurred before was nothing compared to the trials he encountered underway to find his comrade’s military camp again. Yet he did it. When the guard saw him, he wondered what this poor man who had no gun, no boots, no hat and only a torn cape was doing, and found it hard to believe him. “You are not like us”, he told him in a strict manner.

“I would be, had I not lost my weapon, my boots and my hat to get here”, the soldier replied, pointing at his torn cape. Then a crowd of lead soldiers gathered, who kept staring at him with great curiosity and trying to understand how he could possibly be a soldier but not look like the other soldiers at all.

To give a solution to the problem, the guard thought of asking the lieutenant, who showed up and showed an equal amount of disbelief. The soldier then showed him the wounds he had accumulated from the war and gave him a full narrative of the various stages of the last battle he took part in.

Not only was the lieutenant persuaded, but he even asked the other soldiers to get him new equipment immediately. After giving him the appearance of a proper soldier back, he even gave him a medal of honor, as a reminder that wounds and stories identify a war veteran better than his boots and hat do.