The seamstress, the fairy and the wedding dress

THERE WAS ONCE a seamstress that lived in a village far away, and who was so dissatisfied with her job that she was doing everything as slow as possible. A cunning fairy appeared on her window one day, however, who enjoyed playing tricks on humans. She there saw the seamstress sewing a wedding dress, but as she was bored to do it, she stopped every so often and sighed. She then unraveled what she had completed by that point and pretended to be sewing it again, never to finish, at times going to the drawer to get new needle and thread. 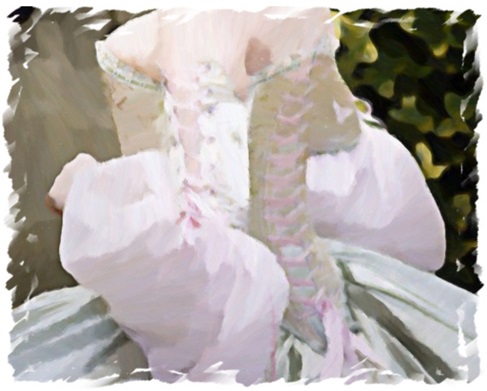 At some point, a young girl knocked on her door, who angrily asked her about the wedding dress. “You ‘ve been sewing it for ten days”, she told her. “You’ll never finish it if you keep on like that”.

When the door shut, the seamstress sat again on her chair and cursed her bad luck. The fairy then, who was staring at her all this time from the window, thought of playing a trick on her: she transformed herself into a shining needle and sat right beside the other needles on the drawer. As soon as the seamstress saw her, she instantly grabbed her and went back to sewing.

This time, however, the needle was the one to direct the movements of the seamstress’ hand, moving quickly and graciously through the fabric. The seamstress got scared in the beginning, only to enjoy it a while later as she found it more convenient for the needle to work by itself. Within half an hour she had finished the wedding dress and the final result pleased her much. As soon as she let the needle drop from her hand, she flew away and attached herself to the bottom of the wedding dress.

So satisfied was she by her achievement that she summoned the soon-to-be wife to congratulate her. To thank her, she invited her to the Church, and wore the dress without removing the needle. When the big day came, friends, relatives and commoners from the village flocked to the Church to attend the ceremony, who marveled at the beauty of the wedding dress.

“What a beautiful girl!”, the men exclaimed. “And what a beautiful dress!”, the women whispered to each other. As the wife entered the Church, however, the needle flew from the dress and a loud sound was heard. The dress started unravelling all by itself and fell on the floor, leaving the wife naked.

The attendees went to cover the girl’s body with sheet and other pieces of fabric they found. Everyone then turned their attention on the seamstress, who got so ashamed that she ran after the needle. Seeing she was about to catch her, the needle hopped from the window and ran outside the Church to the nearest fields

They then played hide-and-seek, until the needle eventually jumped on a haystack to hide. The lazy seamstress then angrily searched the haystack, totally unable to find the needle, until she eventually gave up.

Desperate, ashamed and sweating all over she took her lesson and went back to her workshop where she kept sawing, from now one with more enthusiasm.