The lemon that loved tea

A LEMON once found great consolation in drinking tea. Each time something would make him sad, he made a hot cup of tea with a little bit of sugar or honey and enjoyed it to its last drop. He felt tea was the solution to all his problems. 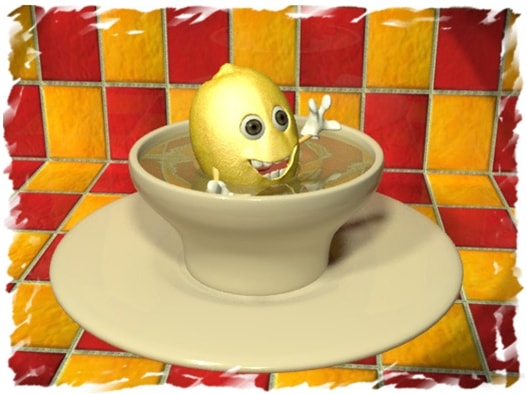 The lemon bathes in tea

When one day he was really let down with his grades at school, he thought a single cup of tea would not be enough. So he took a big pot, and stuffed it with so much tea that could serve an army. He put as many tea bags as he could, and an equally large quantity of sugar. After mixing the ingredients, he picked up a very large cup, even larger than him, and filled it with tea.

"We, Londoners, are avid tea drinkers, but with the quantity you've made, you could even... have a bath in it!", admitted to him a raspberry from England.

"What a great idea!", thought the lemon. No sooner had the raspberry gone away, than the lemon jumped in the cup and started swimming. "How nice and warm it is! I could be sitting in here for hours!", exclaimed the lemon. Soon enough he had forgotten his poor grades and swam carefree.

"Mmmmm.... it's so delicious!", he said and drank from the tea of the cup he was swimming in, taking no notice of his belly getting swollen like a balloon. "I'll drink all of it!". After a while, he had drunk the whole cup and became so bloated that he was unable to move. When at some point he decided it was time to get up, he tried climbing the cup walls, but he was so heavy that he couldn't move a move.

"Good God, I am trapped inside the cup!", he exclaimed, but nobody was around to hear him. Hours later, just before the clock would tick five, the raspberry showed up and said: "Such a pity you drank all of it. We are used to drinking a cup of tea at exactly 5 o' clock in England, but there's barely any left for me".

"I got really sad to see my poor grades at school today, so I thought a single cup would not be enough", the lemon replied. "So I drank all of it, only to get stuck in the cup".

The raspberry then gave him a helping hand to get out, and the lemon thanked him from the bottom of his heart. Since that day, they became good friends and always share a cup of tea at exactly 5 o' clock in the afternoon....