The radish and the horizontal bar

THERE WAS ONCE A RADISH that really loved to work out using the horizontal bar and took great pride in his agility. He would spend many hours in the gym, hanging from the bar for as long as he could. His hands were so strong and swollen from his intense workouts that he could swing on the bar without getting tired. 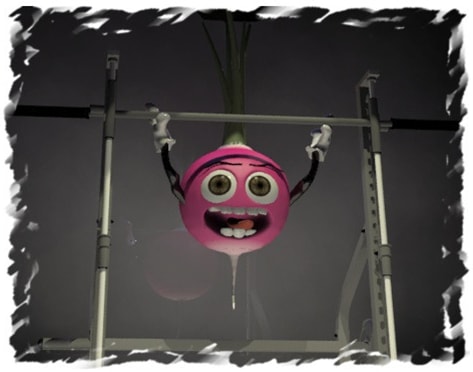 The other radishes in the gym were really fond of him, as none of them could hang longer on the horizontal bar. So one day, they challenged him that he would not be able to hang for longer than half an hour. So sure of himself was he, that not only did he accept the challenge, but asked them to also count time for him. Giving a simple jump and little thought to it, he reached the horizontal bar and hanged from the handle. Time started ticking.

He managed to stay hanging for quite some time, until his muscles started swelling and his hands bruising. He was getting tired and sweating all over, but far from admitting it he, instead, started gritting his teeth, as he was ten minutes away from winning the bet. So stubborn was he, that when he hands slipped, he spinned around the horizontal bar and found himself hanging upside down.

He then quickly glanced at the ground, and was so frightened to see the other radishes upside down that thought he had finally "had the radish".

“Have I perhaps had the radish and took no notice of it?” he asked the other radishes in shock. 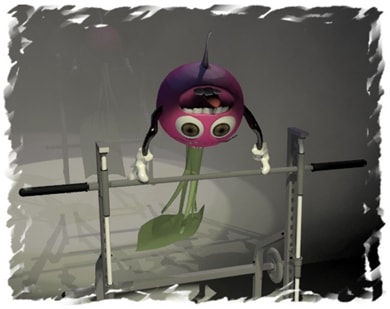 The radish hangs upside down from the horizontal bar

As soon as they heard the question, they burst into laughter. “We also see you upside down, but we are not dead yet!” they replied. “If you feel you can’t make it though, we can get you down, so that you won't stay there forever.”

Hearing their answer, the beefy radish went red with shame, feeling his weak hands slipping the handle. He was left hanging with one hand. “You have won! Just get me down, please!” he admitted the very last moment. They then took pity of him, and offered to help: they placed a trampoline just below the horizontal bar and shouted at him: “Jump!”.

And so he jumped. As soon as he hit the surface of the trampoline, he lifted off in the air again, hopping and seeing the other radishes upside down so many times that he lost count. The other radishes found it so entertaining that they burst in laughter, and from a certain point on, he started laughing and enjoying the experience.

As soon as he placed his foot firm on the ground, and having lost the bet, he admitted to the other radishes: “At least, I am happy to not have had the radish”.