Fruit and Vegetables A' - MoonFlake.com

Abstract art and the pineapple

ONCE UPON A TIME there lived a pineapple that found it really hard to paint. He would spend hours and hours trying to draw houses, trees, as well as animals, which he observed with every detail. No matter how hard he tried however, in the end he was met with disappointment that there was nobody to recognize his talent.

“Do you like what I am drawing?”, he asked, but every single fruit or vegetable to answer would say the same: “Very nice, but what is it exactly?” 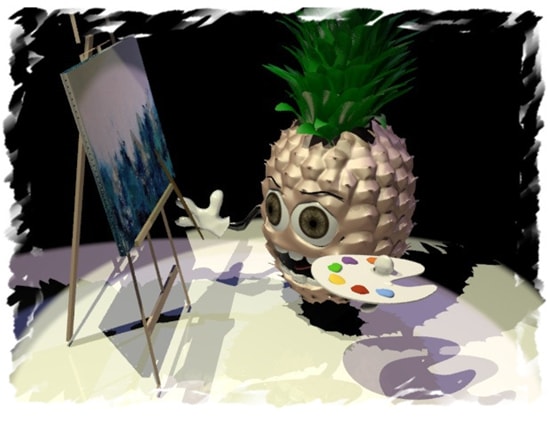 “How come they do not understand what I am drawing, if everything I draw is ‘very nice’?”, the pineapple would say and wonder, finding no answer. “Is it perhaps them who do not have taste?”

So one day, he thought of a way to discover if it was his fault or the others’. He took his dyes, along with a white piece of paper, and started to mix them. Then he took the brush and spread them on the paper, making little effort to draw something specific, but rather as he felt best at that moment.

When he finished his masterpiece, the painting looked like many lines and smudges mixed together. Proud of his work, the pineapple presented it to the other fruit and vegetables, who welcomed it with astonishment: “It is indeed a marvel, with many different colors mixed together. But yet again we do not understand what you have drawn”, they told him.

No sooner had they finished their sentence than the well-travelled tomato then stood up and told them: “You quite clearly have no clue of painting! This is a piece of abstract art, which I first marveled at while on a trip to France. Congratulations to our big painter, the Pineapple, who has finally learned to draw like the greatest artists of all time!”

All the fruit and vegetables of the garden then agreed that the pineapple had greatly improved in drawing, and his creations were indeed comparable to those of the great painters like Pablo Picasso or Toulouse-Lautrec. They gave the pineapple a warm round of applause and from that day on, there was no single person to ask him what he had drawn, but would instead ask him to paint a picture for their homes.

Rumors have it that when the pineapple grew up, he opened his own gallery which contained only the best of his abstract art.