ONCE UPON A TIME there was a kiwi in a grocery store that took great pride in his natural hair, and tended it with great care so as to always have it on the right length. The other fruit and vegetables of the garden, which had smooth and soft skin, turned away from him every time they saw him. So, he found it really difficult to make friends, in a garden full of fruit and vegetables that thought him to be wild.

The situation got really out of hand when one day, a lemon would make fun of him as “hairy”. 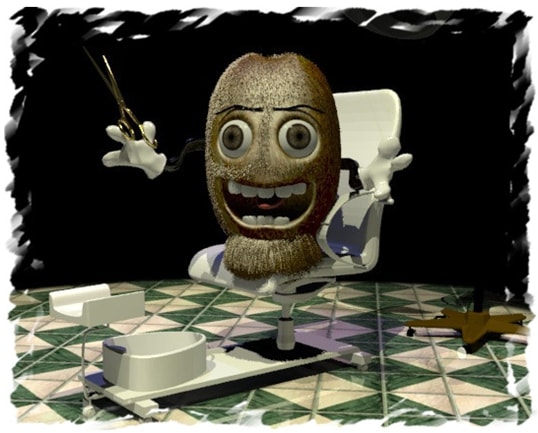 “Good grief, how could I possibly be called ‘hairy’ by the rude lemon!”, cried the kiwi. Coming to the sad conclusion that nobody would value him for what he is, he started contemplating on ways to make them see their mistake.

So he put two and two together, and decided to open a hairdressing salon. He found a proper place, bought chairs, mirror, scissors, along with all the other necessary equipment, and then put a sign just outside the door that read: “Hairdressing Salon”. Just to be on the safe side that the customers would notice him, he hanged posters of young, bearded men on the salon’s windows, and made sure that whenever he took a walk around the garden, he would have a fake, bushy beard hanging from his ears.

The other fruit and vegetables were shocked to see him, since in the whole garden that was no single fruit with hair for him to take care of. As soon as they saw the fake beard however they were astonished, as they had always heard that bushy beards were in fashion. Soon enough, the smart kiwi had filled the garden’s trees with bearded young men, dressed in the latest fashion trends, and made sure he always appeared in public wearing expensive, fashionable clothes that would definitely be noticed.

“So what if you don’t have any hair, I’ll find a way for you”, promised the kiwi. One after another, the fruit and vegetables of the grocery store went to him to learn how. Instead of making fun of him and avoiding him as they had done, before they ended up doing just like him. Soon enough, there was no single fruit or vegetable in the whole garden that would not walk around wearing a fake, bushy beard.

Many days later, and after making enough money, the smart wiki closed his business, threw away the fake beard, and removed the posters from the trees. The moment they saw him, the other fruit and vegetables became curious and asked him why he decided to shave.

Then he replied: “I am by nature hairy, and have no need of fake hair to show what I am worth”.

Hearing his answer, the other fruit and vegetables felt so bad and ashamed that they started to pull each other’s beard. After removing all the fake hair from their faces they finally acknowledged their fault and welcomed the kiwi in their company. Since that time, there has never been a single person to utter a bad word about his natural hair.