A briefcase that once lived in a classroom was so studious that he barely ever walked out of it even during break times. When the time for him to go back home came, he went straight to his room and kept studying non-stop so as to always get perfect A-grades. "No pain, no gain, as the Ancient Greeks used to say", he told the other school supplies when they asked him to join them outside the classroom. 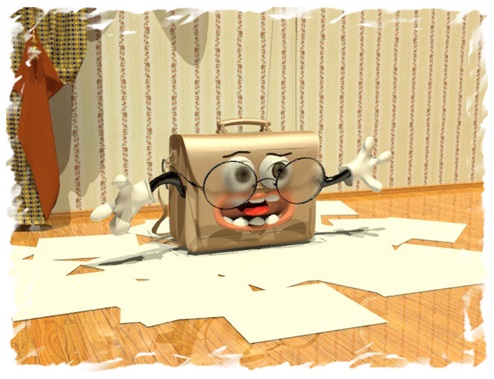 And so time would pass, and the briefcase did very well in all sorts of exams: straight A's in mathematics, A in grammar, A in geography. The other school supplies were amazed by his perseverance and discipline. "He 's very diligent, but would it really matter if he spent his breaks outside the classroom like we do?", they kept wondering.

So one day, the teacher made a big announcement: "Today's we'll be writing in exams in break times. So I want you to go outside, have fun, and as soon as you 're back I will give you your grades". The school supplies went crazy to hear it. Everyone, except for the briefcase, who was panicked, as he had never thought he would have to take an exam in having a break.

The school supplies, that is, the pencils, rubbers, glues and schoolbags of the classroom all went out in the schoolyard to... be examined in having a break. Others skipped the rope, while others played with the ball. Some, who didn't really want to get their clothes dirty, sat in the shadow of the trees and shared jokes and short stories in order to pass their time joyfully. Our good briefcase, however, who was not accustomed to having a break, kept staring at them in wonder, not taking part in any activity. Seeing then that the time would not pass, he eventually reached for his books and studied for the next day.

After a while, the school supplies went back to the class to see their grades.

"Congratulations! You 're all getting a straight 'A' for your performance in the test. Our good briefcase, however, who studying during break time will have to give the same exam tomorrow with the other class", the teacher told them.

As soon as they heard it, they all burst into laughter. Along with them laughed the briefcase who, the very next morning, gave his best self to pass the test "with honors".