A pencil that once lived in a school class took great pride in its geometry knowledge, and it's talent for drawing the most difficult geometrical shape. "I'm the biggest geometer of all, and to prove it, I will draw whatever shape you choose without the use of a ruler or a protractor", she said one day to the other school supplies, and they got excited to hear it. 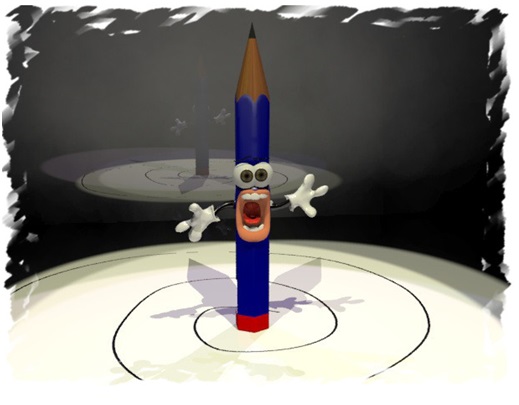 First they asked her to draw a square.

So our good pencil drew a square, with such precision that each and every line looked totally straight. To prove how great a geometer he was, he asked them to measure the perimeter and the area of the square he had drawn.

Secondly they asked him to draw a triangle

To prove what he knew, he drew not only one, but rather three triangles: one with all edges equal, one with only two equal edges and one with all edges unequal in length. The lines were so straight that the school supplies were left to wonder with his skill.

Third they asked him to draw a circle

The pencil touched the paper with his nose and drew the circle in a single stroke. Much to their surprise, he knew exactly where the center of the circle was to be found, and how to calculate the radius and the diameter. The shape looked so perfectly round that they could not help it but wonder how he managed with neither a protractor nor a pair of compasses.

Last but not least, they asked him to draw the Archimedean spiral

"A piece of cake!", shouted the pencil full of enthusiasm and drew a first dot on the paper. Then from that dot he started moving in rotation, not in a circular manner but rather spiraling around it. So many times did he spin around the dot, that in the end he got dizzy. One mistake followed the other. In the end, seeing that he could not make it, he gave up. The other school supplies gave him a big round of applause for his perseverance, realizing that he was trying to perform the unperformable .