The pencil sharpener and the environment

A pencil sharpener that once lived in a classroom wanted to have her pencil perfectly sharpened before writing anything. “The tip of the pencil must be in perfect shape”, she used to say to the other school supplies, never to get satisfied. At times she would often broke the tip out of her enthusiasm, sharpening it again and again until it was back in shape. 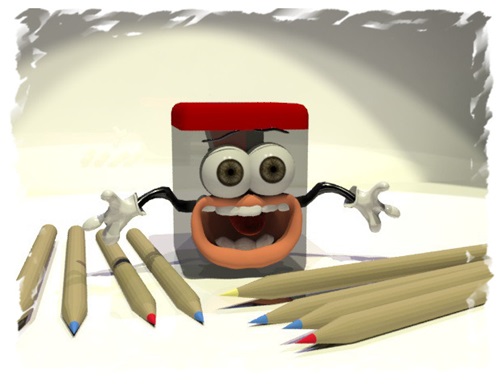 One day, the teacher asked the school supplies to write a composition about the environment. To help them, she even gave them the freedom to write as many pages as they wanted. Our good sharpener got very excited to hear it, as she really loved writing, and so she ran back home after school and lost little time: she took a pencil and a notebook out of her bag, placed them on the desk, and placed herself right in front of them. As soon as she let the pencil’s tip touch the blank sheet of paper, however, she instantly stopped, feeling it was not perfectly sharpened as she had already used it that day at school.

She sharpened the tip of the pencil for the first time. No sooner had she written the first two words, and she was again sharpening it. Just before finishing the first sentence, she had already sharpened it three times in total.

“If I go on like that I’ll never finish”, she exclaimed after adding a few more words and taking a look at the tip of the pencil. And so the story went on, with the sharpener making sure the pencil tip was as pointy as possible before writing anything, until in the end, there was no pencil left but it’s tip. “Let me get another one then”, the sharpener thought and reached for her bag. No sooner had she finished another three lines of text and she was again searching for a new pencil.

“If I am to deliver the essay, I’d best buy a whole box of pencils”, she thought many hours later as she was halfway through the first page, with pencil peels and leftovers covering the floor. The next morning, she went straight to the nearest bookstore to buy pencils. She came back with not only one or two but rather three big boxes of pencils, ready to be consumed.

As soon as she sat on her desk, she prepared the first pencils and wrote with such excitement that she felt nothing could stop her. Pencil peels and half-used pencils started piling on the floor.

“I’m pretty sure my essay about the environment is a true masterpiece!”, the sharpener exclaimed as she finished, he work and started reading it to make sure she had not made any mistakes. Halfway through, she heard a loud knock on her door. It was a cedar tree who had come from the nearby forest, along with a whole company of trees, some of which were carrying big banners that wrote: “PROTECT THE ENVIRONMENT”.

“Sorry to disturb you ms Sharpener, but if you keep on like that, soon there will be none of us left…”, the cedar told her as soon as she opened the door. The tree then showed her out of the window where hundreds of cut trunks were to be seen, the wood of which were used by the local industry to make pencils. As soon as the sharpener saw the barren landscape, tears flooded her eyes as there was nothing to remind that this was once a green forest.

“I’m the one who should be sorry”, the sharpener said as she wiped the tears from her eyes and took another look at the pencil peels that were scattered all around the floor. “If only I had used one pencil to wrote the essay, we would have avoided this catastrophe…”, she added and from that day decided to be more thrifty with pencils.