The globe who goofed up on geography questions

A globe that once lived in a classroom loved geography. She could remember the names of countries and cities by heart, as well as the names of rivers, mountains, islands, continents and even oceans, and the school supplies were really fond of her memory. Whenever the teacher brought a map in the classroom and asked questions, she got so uncomfortable that she goofed up on every question. 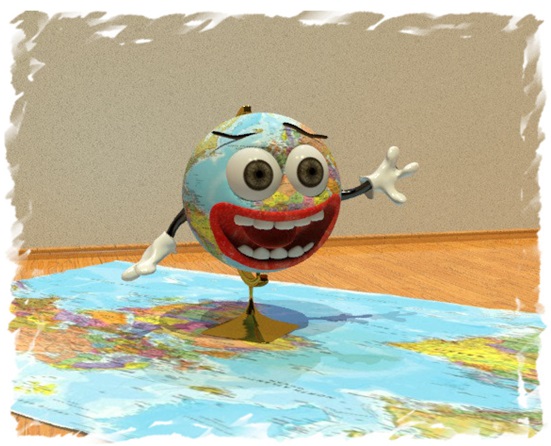 “And now we want the globe to show us where the Mediterranean sea is”, the teacher said one day, placing a big world map right in front of the blackboard. The globe felt challenged at first, only to start feeling uneasy a few moments later, as she had learned so many names of places during the last days that she was beginning to confuse things. After thinking what the word ‘Mediterranean’ meant, she pointed to the middle of the map, that is, in the Atlantic Ocean.

The other school supplies burst into laughter as soon as they hard realized the had confused the two things. Going red with shame, she thought “I goofed up…”, then went straight to her desk and sat down without saying a word. Her teacher tried to encourage her during the following break, however, reminding her that she was very good in geography and it was natural that she got confused at some point.

When the globe got back home, however, she started crying. “What sort of globe am I, to confuse seas with oceans?”, she thought. A big book with colorful maps of the world then caught her attention, which she took and started reading with excitement. As soon as she went over to the nearest window to enjoy the sun’s light, an owl that was sitting in the branches of a nearby tree flew by her, and the globe thought of asking: “My dear owl, I love geography very much, yet every time the teacher asks me to show things in front of the whole class, I totally goof up”.

“What you need then is a mirror, not a book”, the owl replied and flew away to let her think of it.

Not expecting an answer like that, out good globe got really puzzled. She then sat in front of the mirror and observed all she ever wanted to know about the world, basking at her own reflection which contained every piece of information with great detail, from the names of villages and cities, to those of mountains, rivers, valleys, and even seas and oceans.

“Congratulations, you’ve come to possess… self-knowledge!”, the teacher told her the next day that she stood up to show to the other school supplies where the countries of Asia were to be found on the map. From that day on, and after receiving a warm round of applause, there was not even a single time that she got confused again in geography.

Rumor has it that when our good globe grew up she travelled to the ends of the world, so as to get to know from first hand all that she kept reading about in maps all those years.