The magnifying glass and other's flaws

A magnifying glass that once lived in a school had the bad habit of only seeing flaws in others. "You're always exaggerating!", the other school supplies told him. Nobody really took him seriously, as his remarks were always hilarious anyways: "What a big nose you have!", he used to say to the pencil, or "...your feet are like stilts" to the pair of compasses. 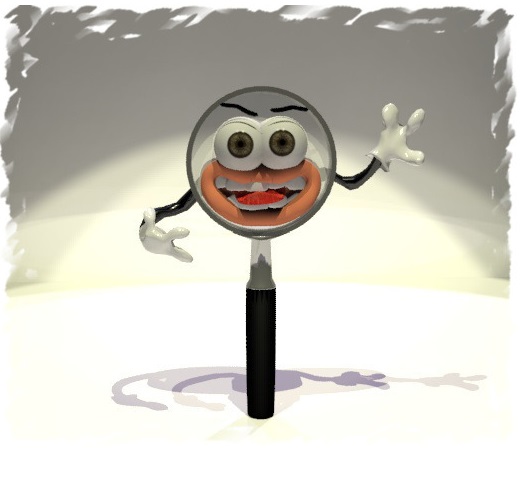 One day, however, the mirror happened to pass right in front of him. "We have a lot in common", he told him, and the magnifying glass was baffled to hear the words that followed. "As we both tell big truths that nobody likes, each one with his own way", the mirror added, and invited him to look at his reflection inside him.

The magnifying glass became even more confused, as he had never observed his own image, but rather spent his time focusing on other people's flaws. He didn't even know how he looked. After plucking enough courage then, he shut his eyes and placed himself in front of the mirror. As soon as the other school supplies noticed what was going on, however, they laughed at him and couldn't help but grab the opportunity to get back at him.

"Do I really have such a large nose?", the magnifying glass wondered, not realizing that the pencil was standing right behind him.

"Look better!", the mirror told him, and the magnifying glass closed his eyes again.

The second time to open them, he was scared by what he saw.

"Are my feet that large?", he asked, not realizing that the pair of compasses was standing right behind him this time.

"Well, look better!", the mirror said for one more time, and the magnifying glass closed his eyes again. This time, however, the whiteboard stood behind him, on which a cute monkey with the tongue standing out was drawn.

"Am I really like a monkey with my tongue out?", the magnifying glass asked, and the rest of the school supplies burst into laughter. As soon as he realized what was going on, he went red with shame. "That's what happens to those who only see flaws in others!", the mirror told him and he almost cried with his lesson. In order to make up for making him feel bad, the other school supplies then erased the monkey and painted a big red heart in its place, which looked even bigger when reflected through the magnifying glass.

And so our good magnifying glass got his lesson, to stop focusing on other people's flaws.