The binder clip that wanted to conciliate others

A binder clip that once lived in a classroom always wanted to see others conciliated. “We have to be united if we want to go forward”, he used to say to the other school supplies, and every two they had a quarrel he always found ways to reconcile them without letting anyone down. The other school supplies were very fond of him for his very special skill and every time they happened to fight over something, they asked him to come up with a fair solution for them. 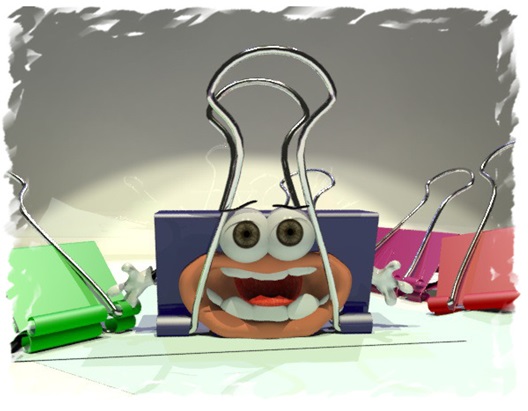 One day, however, two sheets of papers had such a big quarrel that the whole school was alarmed. “I won in the board game”, said the first one. “No, the victory was mine, as you cheated while I was looking away”, the second one replied. So they kept fighting with each other with no one taking a step back, as neither wanted to admit the other was better. No winner was to be found, but rather both of them were losers, as they had both lost their temper.

After a long way, they thought to ask the binder clip to be the judge. “Unless you find a middle way, we won’t sleep tonight”, the scissors told the clip, and the pencil that was standing next to them quietly agreed.

“Board games are very complex, and it is often difficult to tell who wins and who loses”, the binder clip told the two sheets of paper. “Why don’t we play ‘Rock paper-scissors’ instead!”, he continued and took a small rock from the ground. So, they all agreed to hide behind a curtain and appear in pairs until the winner was found. “I hope you know the rules well”, the binder warned them.

The first time, the two sheets of paper came out of their curtains, impatient to be the winner. Nobody won, as paper doesn’t beat paper.

The second time, the first sheet of paper and the pencil came out of their curtains. And so the pencil won, as pencil writes on the paper.

The third time, the second sheet of paper and the scissors came out. The pair of scissors was the winner, as scissors cut paper.

“But paper beats rock!”, the two sheets of paper exclaimed. The fourth time, they waited until they were certain that the binder clip had come out of his curtain carrying the rock. As soon as they saw him, they both came out of their curtains at the same time.

“But we only said two at a time!”, the binder clip told them in a strict manner and let the rock drop from his hand despite the fact that they had both cheated. The two sheets of paper ran to wrap themselves around it, knocking each other out of the way to make sure the other would not be faster to reach it. “You will both be winners, but this time, united!”, the clip told them, then jumped high and bound the two sheets together as soon as they had gotten close.

After coming to terms that they could both be winners, they became inseparable friends, both in play and in real life.