The hole – punch and the hole-ridden paper

A hole – punch that once lived in a classroom had a bad habit of passing time by making pointless holes in white sheets of paper. Such was his boredom at times even, that the often grabbed a piece of paper and filled it with holes until it became completely unfit for writing. He then put the paper back on the stack as if nothing had happened. 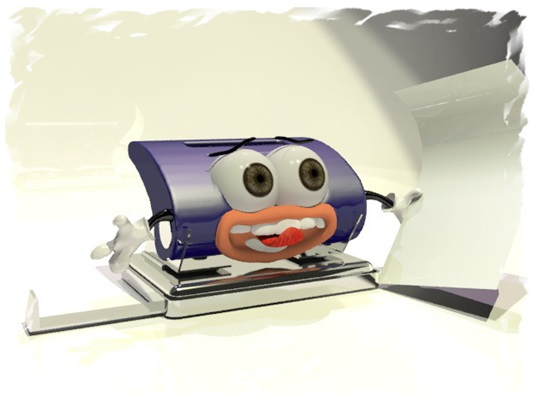 “Why don’t you try something more creative?”, the pair of scissors, who were used to making wonderful pieces of handicraft, told him one day. They then showed him some of their creations: from paper animals and crates, to houses and cars. The hole – punch got very jealous to see them.

He then took it as a challenge to surpass the pair of scissors in creativity. He took a piece of paper from the heap and started experimenting on it so as to give it a shape. Half-way through, however, he realized handicraft was no easy business and that he had learned nothing useful all this time that he had been training himself in making holes. With much experimentation he eventually managed to make a paper plane by folding the sheet as many times as he saw fit.

He then took a second piece of paper and started folding it and unfolding it numerous times. After carefully studying how to work with the sheet, he managed to make a small paper ship out of it. “I can set up a whole exhibition with my creations!”, the hole – punch exclaimed as soon as he saw his finished creation, plucking up the courage to try even greater things.

The then grabbed a third piece of paper and worked on making a paper car, on which he even drew side doors and an engine. As soon as he finished, he took crayons to paint on it, then summoned the other school supplies to show them his creations.

“Here you can see an airplane!”, he exclaimed and showed them the paper plane he had made. No sooner had he let if lift from his hand, however, than the plane crashed on the ground, as the paper he had used was filled with holes he had made the previous days out of boredom, and the plane’s wings were filled with them.

“And here we have a ship”, he went on, placing the paper ship in water. As the paper of which it was made contained holes, however, it soon sunk.

“And let’s guess… the car has a hole in the engine!”, the other school supplies said, bursting into laughter. As soon as the hole – punch heard it he went red with shame, only to admit that they were yet again correct.

From that day he took his lesson and stopped making pointless holes in paper just to pass his time. But he also got better in handicraft, as he realized, that using the finest material is often the most important thing.