Arithmetic and the abacus

An abacus that once lived in a classroom frequently fought with the calculator over who was better at calculating things. “It's me you should be asking as I am the most experienced of the two", the abacus boasted to the other school supplies every time they wanted to calculate something. And it was true that humans have been using abacuses ever since the time of Ancient Greece to make the most demanding and difficult calculations. 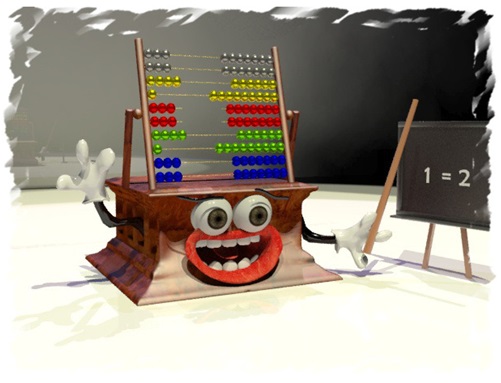 "But as you use beads to do the calculations, the amount of calculations you can do is quite limited", the calculator, who anyways did his work using electronic means, told him one day. “You ‘re wrong”, the abacus replied, adding: “I can calculate any large number, just as you can”.

So they decided to compete in front of the other school supplies so as to show them who could count higher than the other. The school supplies attended the classroom where the competition would be held with excitement, even placing bets as to who would be the winner.

"Let's start by showing us you can count up to a thousand...", the teacher’s desk asked them. The calculator simply displayed "1.000" on his screen by using exactly four digits. The abacus, on the other hand, only moved a single bead from his fourth column and explained to them: “And this is how the Ancient Greeks used to count up to a thousand!”. As soon as they heard it, the school supplies burst into applause, confirming that the abacus would indeed use his first column to count units, the second for the tens, the third for the hundreds and the fourth for the thousands.

“And now show us you can count up to… a million!”, the teacher’s desk demanded. The calculator lost little time, using seven digits to display the number "1.000.000" on his screen. Seeing the result the abacus moved a single bead from his seventh column, saying: “And this is how the Ancient Greeks would count up to a million!”. The school supplies burst into applause for a second time.

“And now for the final round, we want you to show us you can count up to… a billion!”, the teacher’s desk told them. Just us before, the calculator used exactly ten digits to display the number “1.000.000.000” on his screen, and the abacus moved the bead from his last column, the tenth, to show the same number. The school supplies applauded them again.

“Since the calculator can only show 10 digits on his screen, and the abacus has exactly ten columns of beads…”, said the teacher’s desk, “we have… A DRAW!”. The calculator went red with shame, as he believed he was superior due to his speed in calculating things.

When the cunning abacus, who was used to calculating big numbers for many centuries, heard it however he took an amulet made of beads out of his pocket, placed it on the table, and told the school supplies: “You might think we have a draw, but the real winner is me… as I have extra beads for any occasion!”, and then counted up to ten billion by moving just one small extra bead from the amulet, taking his own into consideration.

The other school supplies gave him a round of applause bigger and louder than ever before. So proud was he of his achievement, however, that he accidentally dropped the amulet on the floor, it’s beads scattering all over the place...