A rubber that sat on a desk was very strict with others’ mistakes. “It’s my job to correct you”, she used to say to the other school supplies, who had gotten so tired of her behavior that didn’t even want to see pictures of her, let alone be in her presence. 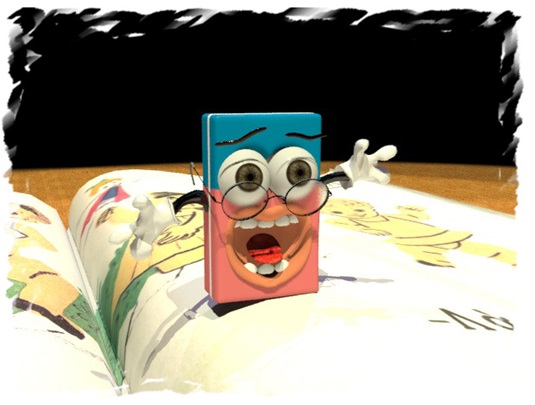 Things got really bad when at some point the pencil, who loved drawing, wanted to paint a cloud. He took a white sheet of paper and starting drawing lines on it. As soon as the rubber saw what he was doing, she took the cloud for a smudge, and angrily told him: “How many times do we have to say it never to make smudges on white paper?”. She then took the white sheet from his hands and erased everything, then pencil bursting into tears as a result.

“It’s her fault for always looking at others’ mistakes and not hers”, a company of crayons told the pencil. He wouldn’t listen however, crying so loudly that nothing could calm him down, until eventually night came and the school supplies went to bed. Unable to fall sleep, the pencil kept spinning in his bed, picturing the strict rubber lecturing him with his imagination.

“Seeing our mistakes is one thing. Giving them the rightful importance is another”, the correction fluid, seeing that the pencil was unable to forget what had happened, told him right before midnight. Our good pencil was then very concerned, as he had not quite understood what the words meant. After giving them a little thought, however, he decided he had worried too much, the picture of the strict rubber stuck in his mind.

The next morning that he got up, he took a white sheet of paper and drew a rubber on it. He made sure that each and every line was so well-drawn that the rubber would find no flaw, then asked the crayons to fill in the colors: brick red for the bottom part and blue for the upper. As soon as the work of art was finished, the pencil summoned the rubber to see it.

“My good rubber, as I was drawing this masterpiece, I made a very small mistake. Could you perhaps find it and correct me?”, she asked and the rubber got really excited with the idea that somebody had finally asked her to correct them.

As soon as she saw the drawing, she got puzzled. “A… rubber?”, she asked then started observing each and every detail so as to detect the mistake. The more she look at it though, the more she felt drawn in by her own image, as if seeing her reflection in the mirror. So amazed did she get, that she was unable to find even the slightest flaw, standing there for hours.

“If you had even the slightest bit of self-consciousness, you would have noticed the white outline that is missing”, the crayons told her, adding: “First lean to see your mistakes and then others’”. She got so ashamed to hear it that she instantly grabbed the drawing and hid so as not to be seen.

From that day on, she tried to first see her own mistakes, and then fix others’.