The laptop that wanted to become a pirate

A LAPTOP that once lived in a household wanted to become a pirate. "Who knows what great treasures await me in the open seas!", he used to say to the other appliances in the house. They rather laughed at him, blaming his bizarre aspirations on the pirate movies he kept watching. 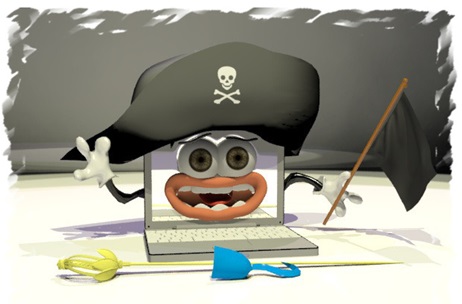 One day, and as the laptop was browsing through the pages of an old book he had taken from the bookcase, he happened to find... a map, on which the garden of the house was clearly depicted, along with a big 'X' spot. "Finally...!", the laptop exclaimed and all the household appliances turned towards him. He, then, showed them the ‘X’ spot and explained to them that it was in the garden just outside the house.

"A mighty pirate such as you would have no trouble finding the treasure and bringing it back to us!", the radio told him, "but first, you have to find the necessary equipment...!". Hearing his advice, the laptop lost no time: he bought a pirate cap, a shovel for digging, as well as a plastic sword with which he would repel any enemies attempting to get in the way of his big treasure - hunt.

He, then, dressed up like a pirate and carefully followed the map's directions. After walking through numerous flowerbeds, he reached exactly the place where the 'X' spot was supposed to be on the map, where a beautiful almond tree in full blossom was to be found instead. He then picked up the shovel and started digging. "Now is my chance to get really rich", the laptop exclaimed, wondering, however, how come he had not encountered any enemies underway.

After digging through the tree’s roots for long hours, he eventually found his big treasure: it was a glass bottle closed with a cork, in which a letter with a red ribbon was to be found, as well as a few almonds. The laptop cleaned the bottle from the dirt, then went straight back to the other appliances in the household to prove he had indeed found a treasure.

"Open it!", they told him and the laptop removed the cork. He then took the letter out, unfastened the ribbon and read it out loud. "You are my treasure...!", read the letter, on which a cute red heart was painted. The laptop was so disappointed to read it, that he angrily threw the bottle on the floor, only to be amazed by the fact that it didn't break into a thousand pieces, as it was made out of the most resilient glass.

"Not all treasures are made of gold and silver!", the appliances told him as soon as he finished reading the letter, bursting into laughter with his lesson. Then they asked him to tell them the title of the book in which he had found the treasure map.

It was no ordinary book, it seems, but rather... ‘Grandma's diary’, which contained the first love letter her husband wrote to her when they first met.