A PRINTER that once lived in a household was very proud of his skills. "I'm much better than the carbon sheet, and definitely more skilled than the photocopier", he used to say, adding "if you want to make your lives easier, come to me". And the other appliances were indeed impressed by how easily he could print any text, in either black and white or full color, with or without images. 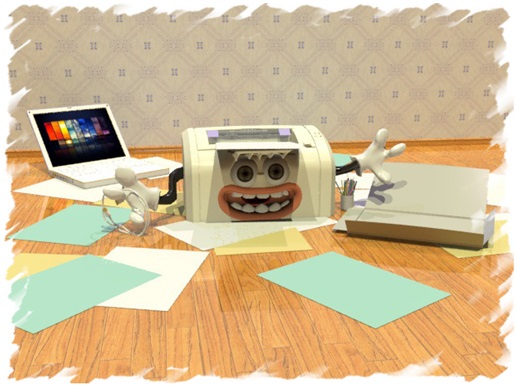 "You're good but sometimes you spend more ink than needed", the pen, who was sitting right next to him and whom the housewife only used when she wanted to send a hand-written letter, told him one day. Our good printer felt insulted, as he always thought he did his job perfectly and the idea that he was wasting ink had never crossed his mind.

"Whereas, I know exactly how much ink to spend and when, so that not a single drop of it goes wasted", the pen added. To prove his worth then, the printer challenged her: they would both try to copy a book, using exactly as much ink as needed so as to deliver something both beautiful and complete, and the winner would be the one to finish it on time without spending more ink than needed.

The pen reluctantly agreed, and as she knew she was anyway much slower, she chose a small book, an instruction manual, that counted only a few pages. Knowing his advantage, the printer instantly agreed, but chose a much bigger book for himself so as to make it more fair to the pen: an Economics book of about 300 pages.

The competition started. The pen took the sheets one - by - one and patiently copied the text from the original book, while the printer was quickly going through the pages with much ease, being extremely mindful of how much ink he spent so as not to run out. So excited was he by his progress that he even started spitting the papers here and there so as to make a display of his speed. "I'll just put them all together later...", he justified himself and kept going. Until eventually... he ran out of paper. Yet, his ink levels were still relatively high.

"And now?", the printer asked.

"Now you'll have to rest for a while", the pen told him, just as she was finishing the back cover of the manual she was copying. She then signed it and gave it to him as a reminder, and the other appliances laughed at his overconfidence.

And so, our good printer took his lesson to economize not only on ink, but also on paper, and to always calculate to the very last detail how much he would spend on each of them every time somebody asked him to print something so as never to be embarrassed again.