A CHRISTMAS BALL once had a great talent in singing. Regardless of her great vocal skills, however, she was ashamed of singing in front of others and patiently waited for the housewife to switch the lights off first every night so as to practice in the dark. 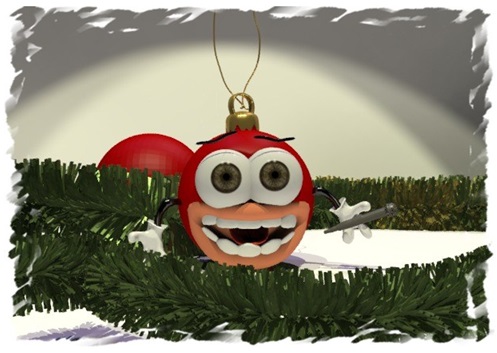 One day, just before Christmas, everything changed when the housewife thought of putting Christmas lights on the tree, which she would leave flashing throughout the night. Our good ball was terrified in the idea that she would no longer be able to sing without being seen, even if the room lights went off. "It's time for you to overcome your fears", the other toys on the tree told her, who enjoyed her song.

Yet the days would pass, and the Christmas ball still felt very uncomfortable. So they suggested to her the following: they would tie her eyes with a ribbon, and ask her to sing "Silent Night". They would then hide and not come out of their hideouts before she had  overcome her shame. As her eyes would be tied, she would not take notice of the time they would come out, and so she would keep singing.

So it happened. After giving her the ribbon and putting on some music, they hid behind the tree's branches. She tied the ribbon around her eyes with hesitation and approached the microphone.

"You can do it!", the other Christmas balls shouted at her from their hideouts to encourage her to follow the song's rhythm and let the words come out. With much effort, she did it.

"Silent night, Hoooly night...", she sang with in low voice at first. Gradually, she let her voice come out even louder, until in the end, she felt totally free. As there was no clapping heard at the end of the song, however, she felt uneasy and took the ribbon out.

Much to her surprise then, she saw the housewife, who burst into laughter to see her. "Well, that's where this beautiful song came from!", she told her, and the ball kept singing uneasily. Not only did she applaud her, but the other balls also came out of their positions, followed her in giving her a big round of applause and started singing to her tune.

Since that time, and with the shock she had been through, our good ball not only overcame her shame but also learned to sing in front of the harshest of judges.