Pepino and the cooking contest

AN EXOTIC FRUIT that once came from distant Latin America came to Greece and built a career for himself as a cook. "My name is Pepino and they say I have a great talent in cooking in my country!", the Pepino told the other fruit and vegetables of the garden. Not only did they get excited by his words but they also welcomed him and made him feel comfortable. 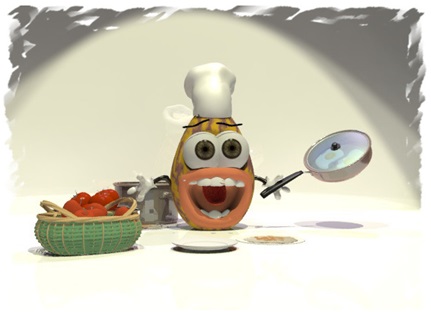 The Pepino then lost little time in making his dream of starting his own restaurant reality. He rented a suitable place, then placed chairs, tables, decorations and bought the necessary cooking ingredients to start his enterprise.

When the time to decide what sort of plates he would be offering came though, he got really troubled, as he had no idea what the other fruit and vegetables liked most. Days passed and he was even reluctant to announce that he had opened a restaurant. One day, however, he found a cooking contest poster hanging from his door.

"This is my chance!", the Pepino thought and instantly called to sign up. The pear on the other side of the line informed him that he would be the judge of the contest and that he would be delighted to try something cooked from his hands.

When the day of the contest came, the Pepino showed up in the big hall where the other contestants were already preparing themselves: it was the lemon and the avocado. The pear was seated comfortably behind the bench, whereas a big crowd of fruit and vegetables gathered to see the contest.

"For the first plate I want you to cook something with eggplant!", said the pear, then sat back and watched. The three contestants moved into position and started cooking with enthusiasm. The lemon cooked tomato-eggplant tartines, whereas the avocado cooked eggplant parm chips. Not knowing much about local recipes, our good pepino thought of cooking Moussaka.

"Your plates are very nice. Moussaka was also very nice but we've gotten tired of it here in Greece", said the pear while trying the plates. The Pepino was disappointed to hear his response.

"And now I want you to cook something that is based on puff pastry", said the pear, then went to sit on his chair. The three cooks did again their best. The lemon cooked chicken pot pie and the avocado pastry pizza. Again, not knowing what to cook, the Pepino chose to make cheese pastry pies.

"I loved both the chicken pot pie and the pastry pizza. But we are so used to cheese pies in Greece that it makes little difference", said the pear. This time, however, the Pepino got so disappointed that he thought of calling it quits.

"And now for a third and final plate, cook whatever you want!", the pear announced. The Pepino then thought of cooking Mexican food which he knew well, as he had already failed twice by choosing dishes that the locals were familiar with. He cooked tacos with chicken, whereas the lemon cooked slow roasted lamb and the avocado cooked stew.

"All your dishes are great, but those tacos are extremely tasty! Congratulations!", said the pear to the Pepino with excitement after trying all three plates. "If you don't believe me, please give it a try!", he suggested to the other fruit and vegetables that were watching the contest and they in turn agreed, as they were extremely happy they were finally trying something they had never tasted before.

"Why not cook Mexican in your restaurant?", they all told the Pepino, giving him a big round of applause. Not only did he win the contest, but he also realized he would have far more success if he kept doing what he already knew how to do well instead of adapting to the standards of Greek cuisine to please others.

Within a few weeks his restaurant knew so much fame and success that he soon hired others to help him, whom he taught all the secrets of cooking the most delicious Mexican dishes.