The tiny cucamelon and the melon

A CUCAMELON that came from distant Mexico looked so short and small compared to the melon that the other fruit and vegetables couldn't resist making fun of. “If only I were tall like the melon”, complained the Cucamelon and cried every time someone teased him for his height. So the days went by and he was left without any friends, as he thought everyone was making fun of him. 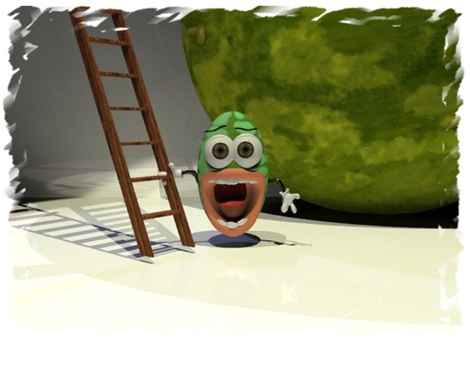 One day he finally happened to meet the melon himself, who almost trampled on him. “Sorry… I did not see you!”, the melon justified himself. “Well, if only I were half your height, you would have seen me alright”, the Cucamelon sulked. When the melon realized he had made him feel bad, he immediately apologized, even inviting him over for a round of basketball the next day so as to make things up.

The Cucamelon politely accepted the invitation, but soon started having second thoughts. “How could we possibly play basketball and be friends when I look so tiny in front of him?”, he mumbled while taking a walk in the garden the same night. An owl happened to hear his whisper, however,  who flew over to share her wisdom with him.

“A friendship is not judged by similarities but by differences. So go tomorrow, and if you see that your friend takes advantage of your height, have a ladder nearby just in case”, she told him and flew away.

The next day, our good Cucamelon plucked up the courage and went over to meet the melon in the yard, carrying a ladder with him. As soon as he arrived, he was met with an even stranger sight: the melon who was there already, had placed an extra basketball in the yard, one that was smaller and more suitable to his friend’s height.

“I’m glad you came, as it took me quite the effort to get it out from the storehouse”, the melon said. “But what did you bring the ladder for?”, he continued. The Cucamelon replied: “I thought we might need it… for a slam dunk!” and they both burst into laughter. Then they trained together for hours, as the melon showed him his best tricks: how to shoot, where to stand for a three-pointer and how to perform a slam dunk.

“You are so different, yet so similar!”, the other fruit and vegetables exclaimed when they saw them in the same team a few days later. And they indeed had so much harmony in their movement that it was as if they knew beforehand each other's movements. So it came as no surprise when their team won, and the other fruit and vegetables were really fond of their collaboration.

Since that time they became inseparable friends, always giving each other a helping hand should the need arise.