ONCE UPON A TIME IN MEDIEVAL SPAIN, a hen hatched a dozen eggs, out of which twelve chicken came out. And while she was proud for all of them, the youngest happened to be a very weird creature, with only one leg, one feather, one eye, half a head and half body. "My God", his mother cried, "it is only half of a chicken and will never be strong enough. I need to take special care of it". So, she named it Medio Pollito, which means 'half chicken'. 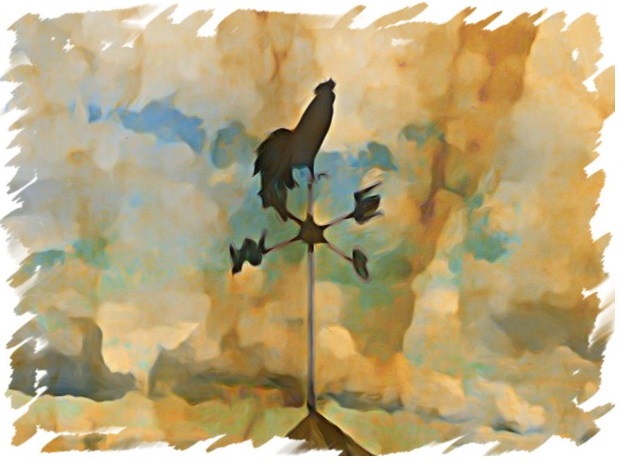 Medio Pollito's mother always protected him, along with his brothers and sisters. But as Medio Pollito grew up and realized that he was only half a chicken, he felt uneasy. He would sit countless hours all by himself during the day, only to cry in the evenings when nobody would hear him. Until one day, he found the courage to say to his mother and siblings: "Since I am a half chicken, I'll go to Madrid to find my other half".

His mother was scared to hear it. Soon, however, she remembered her own youth before she met her rooster husband, and thought that she could not object to her son's wishes. Medio Pollito gathered his belongings and fare-welled his mother and siblings. "Be kind to those you meet on your way", his mother advised him.

As he travelled to Madrid on foot, he found an oak tree with a hollow, inside which the wind was trapped, blowing the tree's leaves and branches to all directions. "Medio Pollito, please free me from the branches. I'm here to blow, like all winds do, and not stay trapped in here forever", the wind told him. And so, Medio Pollito freed him, to which the wind reacted by promising: "One day I will return the favor".

When he finally reached Madrid, he searched for his other half. No chicken would give him the slightest attention, however, as he was only half a chicken. Disappointed and sad, he kept walking around, until one night the inescapable happened: in the other side of the street he saw a chicken with only one foot, one feather, one eye, half a head and half a body, just like himself. They fell in love at first sight. But when he tried to cross the street, a cart happened to pass by right in front of him. As soon as the cart was gone, the half chicken had disappeared from the sidewalk.

Medio Pollito ran in the streets of Madrid to find her. He went north, south, east, west and then again to the north and to the south until... he got lost and burst into tears. The wind then, who owed him a favor, told him: "So as to repay you for freeing me, I'll place you on the highest top so you can see your other half".

The wind then blew and lifted Medio Pollito in the air, placing him on the bell tower of a very high Church, where he is to be found to this day, pointing at the wind's direction. When the wind changes course once in a while, they exchange glimpses with his beloved, who happens to be placed in the bell tower of the Church in the exactly opposite street.