The weaver and the abacus

ONCE UPON A TIME there was a weaver who agreed to guard a farmer's sheep.

The farmer, who soon realized that this man wasn't very bright, gave him very specific instructions for everything he had to do. 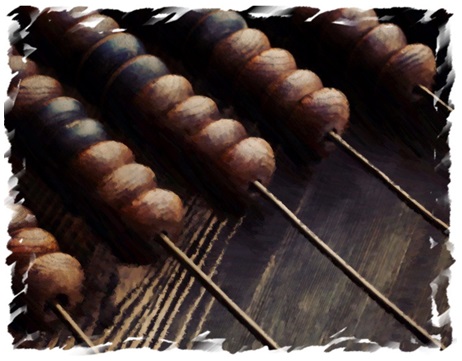 In the end, he told him: "before gathering the ship to turn back home, make sure you count them so that you don't lose them". To help him he even gave him an abacus, who had exactly as many beads as the sheep. The weaver, who didn’t know how to count, pretended to have understood, then took the herd to a nearby pasture where the sheep ate grass all day long.

As soon as night fell, the weaver took the abacus and started counting sheep. As he didn't know how to count, however, he mistakenly count some of them twice. When he explained the story to the farmer, he got angry at him, believing he had lost sheep. So, he fired him and the weaver got really mad, blaming it on the abacus.

The next day he went to a mathematician to ask him to explain the function of the abacus, and to prove to him that the tool led to all sorts of terrible miscalculations. They debated for eight hours straight, counting many things in their surroundings, until in the end, the mathematician managed to persuade him that it was his fault he could not count the beads correctly.

The next morning the weaver reached a village where many other weavers lived. "You are more than welcome", they told him, "but tomorrow morning, six of us will go out to find wool to weave, and we want you to join us".

The next morning, they all woke up, seven in total if you include the weaver of our story, and went to the nearest village to buy wool. Underway they had to cross a river, however, which was full of water. As the level of the water had fallen by the time they arrived, they simply took their clothes off, tied them on their head and swam to the other shore.

As soon as they were all in place, their leader asked the weaver to count them. He then took the abacus out, and started counting them, according to the lecture the mathematician had given him, to make sure they were all seven. So bright was he, however, that he counted six people, excluding himself. When he announced the number, they all got so frightened that they shouted to see if they had indeed left someone behind. A shepherd then heard their loud noise, and asked them what was wrong.

They then told him: "seven of us set out from our village, but now we are six. We are worried that someone may have drowned in the river as we crossed it!"

The shepherd then took the weaver's abacus and counted beads. "One... two... seven!", he exclaimed and as soon as he had finished counting, they all realized the weaver's mistake, only to admit to the shepherd that... the weaver forgot to count himself.