The grouse and the cuckoo

(an adaptation from a tradition of the island of Kythnos)

THE BIRDS OF THE SKY ONCE GATHERED and decided to open a school for their children. One morning that the student birds were already in class, a cuckoo grabbed a tiny basket and went over to feed her child. Such was her diligence, however, that the basket she held contained but a few leftover breadcrumbs. 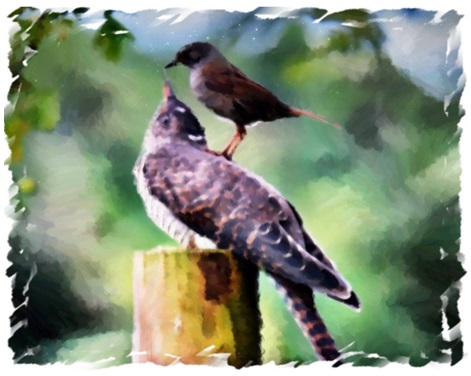 On her way, she met a curious grouse, who was also carrying food for her child.

"Where are you headed dear cuckoo?", the grouse asked her.

"I'm going to school, to give my child something to eat", the cuckoo replied.

"Since it's in your way, could you also take this basket I have and give it to my child?", the grouse asked her, and handed over to her a big basket, full of delicacies she had prepared for her child.

"And how will I know which bird is your child?", the cuckoo asked her.

"That's a piece of cake! You'll know straight away, as it is the most beautiful bird of all", the grouse told her and then they parted ways. The next time she found her, she asked her if she had done as she had asked.

"Well, you told me to give it to the most beautiful child, but I couldn't find any other bird more beautiful than my own child, so I gave it to him", the cuckoo replied, much to the grouse’s surprise.

Since that time, she has made a habit out of feeding her children using tricks.