A HUNTER that once lived in a Kingdom full of green forests had created a fortune from his trade. Armed with only his bow and spear, he had managed to catch all sorts of rare species of birds, which he sold in the town market. One day that he had gone out for a hunt, however, he saw a beautiful white swan that caught his attention. 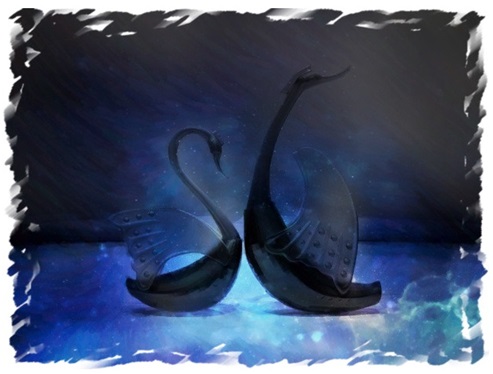 “What a beautiful bird!”, he thought. “It will be worth much if I kill it and sell it in the marketplace. Its meat will definitely be very tasty”.

As soon as he aimed towards the swan with his bow, however, the bird faced him and addressed him with a human voice: “Do not kill me, as me and my pair are the last swans in the lake, and she will be very sad to see me gone”.

The hunter wouldn’t listen, however, firing a strong arrow directly at the swan’s heart. After the beautiful bird let its final breath, he gathered the dead body and placed it in a sack, then headed to the marketplace where he sold its meat for a thousand gold pieces to a rich man who wanted something special cooked for the King.

The next day, however, the rich man came back to the hunter and told him: “My wife cooked the meat which I bought for you and we invited the King over to dine with us. I only told him it was a swan only after he had finished his meal. He then asked me if you could catch the second swan and take it to him, but this time, he wants the bird alive. If you do so, he’ll give you a big reward”.

The very same night, the hunter fell asleep in his bed, dreaming of the big reward. In his sleep, however, he saw a different dream: that the swan he had killed had become an angel with wings, who begged him not to come close to his beloved. The next day he got up, he took the bow, the spear and a net, and went to the woods. He then found the second swan who was in much sorrow. As soon as the swan saw him, she told him:

“You’ve killed my pair and ever since that time I live all alone. I don’t want such a life. I’d rather die as well so I can see my lover again”.

The hunter heard her, but instead of killing her, he trapped her using the net. He then placed her in a sack and went to the King’s palace. As the swan was noisy on the way, however, he pierced the animal’s beak so as to wound her. When the animal tried to escape, he hit her with the spear, then took out her feathers so she could not fly away.

As soon as he reached the Palace, he presented the game to the King, and told him: “I’ve brought you the last swan alive, as you requested, and I now want my reward”. No sooner had he uttered the last word than the swan gave out her last breath.

The King then told him: “There was once a time in our Kingdom when love was so abundant that it made men transform themselves to birds at will. When many years later their hearts dried, however, all love was lost. The swans that you killed and who were the last in the lake, were nothing but two young children who chose to live as birds so as to spare themselves from the world’s cruelty. Yet you killed them mercilessly, no matter how much they begged you not to. A similar reward then awaits you”.

And with those words ordered him closed in the jail.