The dog, the wolf, the cat and the shepherd’s denture

A SHEPHERD ONCE had a dog who was very old but had accompanied his through many difficulties. As the dog had lost all his feet and could not bite, the shepherd’s wife used to cook him soups. Yet one day that the shepherd was standing with his wife in front of the door, he told her: “I will kick the dog out tomorrow as I don’t need him any longer”.

His wife, who felt sorry for the poor animal that had accompanied them all those years, told him: “He has been a loyal servant and it would be wiser to keep him”. 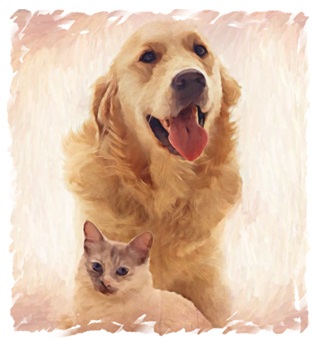 “No”, said the man. “He barely has any teeth left in his mouth and no thief fears him. He’s best go. And if he has served us loyally as you say, we have rewarded him already for it”.

The poor dog, who was sitting behind the door, heared everything. So did the cunning cat, who told him: “When the shepherd’s wife brings you soup tomorrow, don’t touch it. Just take a half-finished bone and pretend to be chewing, so that they think you still have teeth left”.

So it happened. The next morning, the wife’s shepherd left a soup plate in front of the dog’s house, while the cat left to find a half-finished bone to bring him. When she came back, she gave it to the dog, who had not touched the soup at all. So he took the bone and pretended to be chewing it so as to be seen by the shepherd. When the wife saw him, she immediately called her husband and told him:

“You were wrong. Our dog still has teeth, and it was a bad idea to send him away”.

Yet he found it hard to believe, thinking that the dog was playing tricks on them. He then told his wife: “Alright, but if it is so, please prepare lamb chops for him to enjoy. Tomorrow morning I want to see if he has finished them”.

The same night the woman cooked lamb chops and left a plate in front of the dog house. The wolf, who hadn’t touched the soup all day, got really hungry and started licking them. The cat then told him: “We’d best ask a wolf to come over and eat them, so the houselord gets to see only the leftovers tomorrow”.

So it happened. The dog invited over a wolf in the yard, allowing him in with much caution so as not to be understood by the shepherd who would definitely cast them both out. The wolf devoured the lamb chops, leaving only bones behind. The dog then thanked him and showed him the way back to the forest. However, as the wolf was cunning, instead of returning to the forest he hid behind a tree and patiently waited for morning to come so as to get in the sheep den.

When morning came, the shepherd’s wife approached the doghouse and saw the leftovers. She then summoned her husband, who get very curious and opened the dog’s mouth wide so as to see if he really had any teeth left. He then said:

“I cannot possibly believe he ate them all alone, as there’s barely any teeth left in his mouth. Go back to the kitchen and cook a steak to see if he will eat it”.

So it happened. The wife went to the kitchen and put a steak on the fireplace, whereas the shepherd left to find his sheep. The cat then told the dog: “Do not fear, as the shepherd leaves his denture I a glass of water on a tabletop right outside the sheep den. You simply need to put it on and prepare for lunch as soon as the steak is ready”.

While they were both making plans, however, the cunning wolf found the opportunity to invade the den and hide. The dog took the denture out of the glass, put it in his mouth and waited patiently. As he waited, however, saliva started running out of his teeth, as he had eaten nothing.

When the wolf saw him, he went out of his hideout and burst into laughter. The dog got so sad that he started barking loud, and the wolf started howling back at him. As they were both fighting, however, the shepherd happened to return with his sheep, who took a gun to cast the wolf out. And so the wolf started running, and the shepherd chased him until he hid in the forest.

By the time he got back, the shepherd’s wife had prepared the steak and given it to the dog, who tried in vain to bite it using the denture. Yet the denture was too thick and constantly moved out of position, making it very hard for him to chew. When the shepherd got back in the den, he hugged the dog and told his wife: “He’s so loyal than even without teeth, he thought of putting on my denture so the wolf would get afraid of him!”

The dog then put the denture out of his mouth and went to lick the soup that was leftover. From that day, a plate of hot, tasty soup awaited him outside his doghouse.