The mango that wanted to be a magician

THERE WAS ONCE a mango that really loved the magic tricks he saw from professional magicians. He was amazed to see them on stage, and each time he attended a live show he would put himself in their shoes. “I want to be a great magician like them”, he would say.

So one day, he plucked up the courage to see a professional magician cat and ask him to teach him his tricks. “I want to know how to draw rabbits out of my hat and how to make items disappear with a single touch of my wand”, he told him, “but most of all, I want to be admired by all”.

“Very well. Let’s start by finding a hat and a wand for you then”, replied the magician cat. He then went to his dressing room and after a moment returned with the items he promised: a hat, a wand and a few carrots.

“These are for you”, he told the mango, “but before I give them to use, I want to show you how easy this is”. He then took the hat and pulled a rabbit from it. After putting on the hat again he grabbed the wand and with the slightest touch made the carrots he held with his other hand disappear. After a few hours of training the magician cat told the mango: “Tomorrow is show time! What a great chance to prove others how great a magician you are!”

So the next day, they both walked in a room full of curious fruit and vegetables, who impatiently waited to see the magicians’ new tricks. Many feats later, and after the magician cat had exhausted his inventory, he announced to the room: “Now it’s time for my apprentice to show you some tricks”. And he called the mango to appear on stage.

So amazed was the mango however to see all those tricks on stage, that he had taken his hat off and left it on the seat next to him. As he was not starting, the hungry bunny that came out of it gulped down all of the carrots in his pocket and, then took a nap inside the hat to stomach them. When the mango got on stage, the two magic tricks he had been trained so hard to do failed miserably: the rabbit was so drowsy that would not come out of the hat, and the carrots he would have conjured were already in the rabbit’s stomach.

The fruit and vegetables stared at the failed show with bated breath, ready to start booing. The experienced magician cat then, canny as every good magician and so as to spare his student from becoming humiliated, whispered to him behind the curtains: “check you other pocket!”. 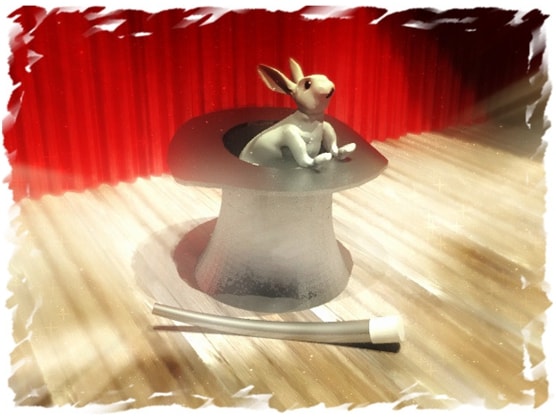 The rabbit jumps out of the hat

The mango then searched his other pocket, only to realize that his prudent teacher had placed another two carrots there for backup. After placing them on his hand, he attempted to magic them away with his wand. No sooner had he waved the wand and the rabbit jumped straight out of the hat, craving the carrots that smelled of freshness. Now the crowd burst into a wild applause.

“Today you got your first lesson as a magician”, the cat told him as soon as the show was over, “you see that people are as likely to jeer at you when you’re not prepared enough”.

Rumour has it that after learning his lesson, the mango became a great magician....