A tale of fish

MANY BELIEVE THAT FISH WERE always fish, and that no fish ever lived out of water. But if one was to travel as far as Australia and meet the Aborigines that live in the wasteland, they will tell a different story. They say that many years ago, a tribe of fish that was very jealous of humans decided to live on the earth. So, they got out of the water and went on to live the life of a nomad, moving from place to place and hunting other animals. But if one was to realize that fish have no feet, he would understand how difficult their life must have been. 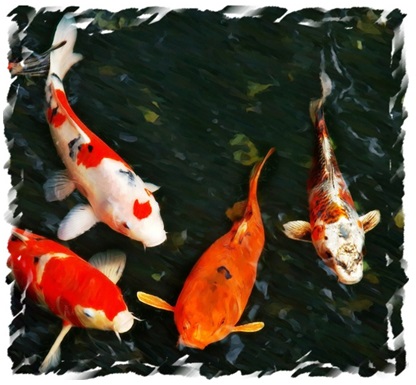 One day that the tribe came back from a hunt, they searched for a quiet, secluded spot to rest. As it was very hot that day, they thought the best place would be the shadow of a tall tree, which was rooted near the shore of a river. So, they lit a fire in order to cook, just as humans did, by gathering wood and using flint stones. As some of them were busy with the cooking, the rest lied down on the grass, only to notice dark clouds gathering in the sky. As soon as it started raining, the fire they had lit quickly extinguished. A strong wind soon followed, and the fish that were wet from the rain started to shiver.

"We will die of the cold unless someone lights the fire again", thought the tribe's first fish. He then ordered another two fish to use more flint stones on the sticks. But as the firewood was wet, no fire could possibly be lit. "How do humans do it anyway?", the fish wondered.

"Let me try", asked a second fish, only to discover that his luck was no better than the previous fish's. One after another the fish offered to try, only to fail. Not even a second did they think of jumping in the water so to as to protect themselves from the wind that was blowing.

"It's pointless", thought the wise fish. "The wood are wet. We must wait for the sun to come out again, lest we die of the cold". Then a very small fish, in the size of a human palm, kneeled before the wise fish of the tribe and said: "I have seen a magic trick that humans do, with which I will light the fire".

The fish then cut a trees' trunk in two and placed the pieces above the ashes of the fire, which were still burning slowly. They then blew air into the ashes, and a small spark of flame was soon to come out of them. More fish gathered, blowing even harder so as to ignite the fire again. But as the wind was still raging, the fire was in danger. The fish than gathered in a chain and used their back to protect it from the wind.

"More wood", requested the small fish. All the fish that shook from the cold tore down the tree's trunk. The more wood they put in, the stronger the flame.

"Soon we will feel the warmth", one fish told the other as the fire got even bigger. So excited were they, however, that they soon forgot they were protecting the fire with their backs, and the wind blew the fire on them!

Shaking with terror, they instinctively fell in the cold river. Soon they remembered that they had scales and so they swam to the depths to protect themselves, were they still live to this day.