The pear that only ate gourmet

THERE WAS ONCE A PEAR that had a very fine taste in dining. He would often stare with wonder at what the other fruit and vegetables of the grocery store would eat, as he always wanted the food on his plate to be something special and exquisite. He had even found a very specific word to describe his meals: “I only eat… gourmet!”, he explained to the fruit and vegetables of the garden. 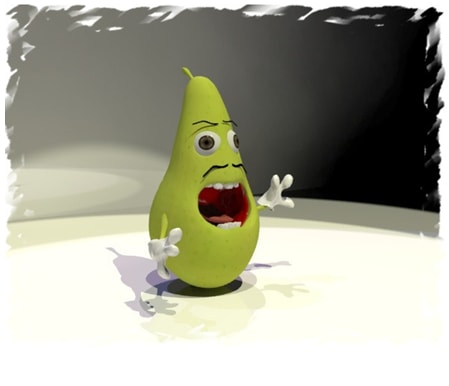 “It makes me wonder how you could possibly eat what you eat”, he would boast at their expense. “You have clearly no taste for high cuisine”. They would then make fun of him, as he always mentioned unknown dishes with weird names which looked more pieces of art rather than edible food. What made them even more curious was how he could feel full with the small portions he was eating.

So they one day gathered and thought of teaching him a lesson for being arrogant. First they asked the lemon to wear an apron and lock himself in the kitchen, then pretend to be cooking. While the pear was taking his walk in the garden, they turned the grocery store into a restaurant: they put wallpapers on the four walls, brought chairs and tables and placed candles and cutlery on them. They then asked the pear to join them. They told him:

“A renowned chef from France has paid a visit to our grocery store, the great Le Mon. Since there is no one among us with such a fine taste as you, we want you to try his plates and rate him for us.”

As soon as the pear heard them, he flew with joy. He entered the grocery store – restaurant and sat in the first table, then folded the towel he found on the table and placed it above his belly so as not to get dirty. A couple of minutes later the lemon exited the kitchen carrying a plate and greeted him: “Here is your starter”. The plate, however, was empty.

The pear was startled to see it, but was ashamed to say a word. Instead, he pretended to enjoy his starter, believing that the other fruit and vegetables were watching him. In reality however, he was only eating air. “And now it is time for the soup”, continued the lemon a few minutes later, leaving yet another empty plate on his table. The same story went on and on, and the pear kept on pretending to be eating, till his stomach became swollen like a balloon from too much air. “Thank you, your dishes were a real delight”, said the pear to the great chef Le Mon as he finished his last dish, the dessert.

A few meters down the road, he found a tree with a thick shadow and lay on its roots to take a nap. No sooner had he closed his eyes than a fly sat on his belly that was bloated from eating too much air. The pear jumped up in shock.

“Be careful next time, not to stuff your belly with… air!”, the fruit and vegetables that had gathered around told him. So ashamed was he to hear them that from that day on he never boasted again for his food.